As predicted below, on Saturday 11 May, the second of the two new Queensland Government (QGAir) Rescue (State of Queensland) Leonardo S.P.A. Helicopter (Agusta) AW139 helicopters VH-EGF was photographed ferrying North from Archerfield to Townsville and then Cairns via Rockhampton Airport.  Local plane spotter Kayanne H was on hand at Rockhampton Airport as VH-EGF called in for fuel. 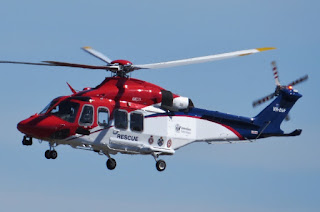 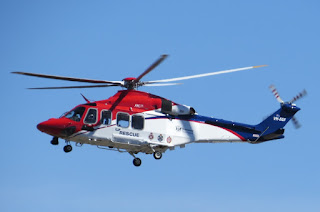 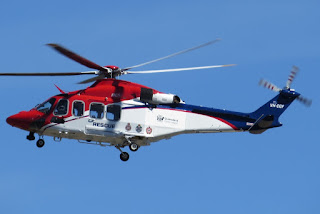 VH-EGF arrived into Cairns during the middle part of the afternoon and was immediately called into action completing medical evacuation flight to Innisfail and back to Cairns as "Rescue 510".

Of interest, fellow QGAir AW139 choppers VH-EZJ, and VH-EGK, continue to also operate in Far North Queensland between their Cairns and Townsville bases.  VH-EGK was the first of the two new Leonardo S.P.A. Helicopter (Agusta) AW139 helicopters to ferry to Far North Queensland at the end of March.

As also posted below, VH-EGF made its first visit to CQ on Wednesday 8 May when it completed a medical evacuation flight to Bundaberg.

All photos taken by Kayanne Hardsman  ©
Posted by Damian F at 8:58 PM