As we've been reporting on our Facebook page, 18-year-old Lachlan Smart is in the final stages of a record-breaking solo around-the-world flight in Cirrus SR22 VH-IBC.  On Tuesday 23 August, Lachie piloted VH-IBC into Longreach Airport from Darwin. 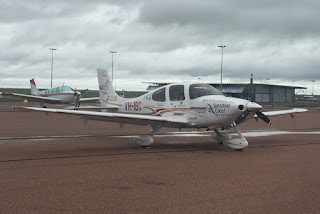 He is expected to complete media and other commitments including a meet-and-greet at the Qantas Founders Museum at Longreach on Wednesday 24 August before departing to Bundaberg Airport on Thursday 25 August.

Lachie is expected to touch down in the rum city in VH-IBC at around 12.00pm on Thursday.  He will be giving a presentation of his world record breaking flight at the Hinkler Hall of Aviation in Bundaberg on Friday 26 August at 3.30pm.

Lachie will then head 'home' to the Sunshine Coast early on Saturday 27 August, completing his record-breaking solo circumnavigation of the globe. 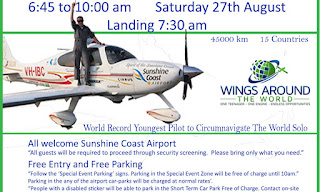 Lachie will be 18 years, 7 months and 21 days when he touches down back at the Sunny Coast.  While the record is key to this journey, it was never the motivation for Smart to pack his life into a single engine plane to fly across vast masses of water, stopping in 24 locations and 15 countries along the way.

Read more about this remarkable young man at:  http://www.wingsaroundtheworld.com.au/

Meanwhile, several light General Aviation (GA) aircraft have also called into Longreach Airport over the last couple of days including Royal Australian Air Force (RAAF) Beech B350 Super King Air A32-670 which touched down on Tuesday 23 August from Canberra as "Consort 89".  It looked to depart to Townsville later in the evening before returning to Longreach on Wednesday 24 August from Winton and then later departing to Charleville and points towards the South-East.

A couple of other Super King Air turboprops in the form of AirServices Australia / Pearl Aviation Hawker Beechcraft B300 VH-FIY and Queensland Government (State of Queensland) Raytheon B300 VH-SGQ also called into Longreach Airport on Tuesday 23 August.

Of interest, VH-XLB is pictured above at Gladstone Airport on Sunday 21 August.  It had earlier arrived from Redcliffe and departed to Mackay and Townsville.

Finally, on Sunday 21 August, and for the second Sunday in-a-row, Hawker Beechcraft C90GTi King Air VH-JJU called into Longreach Airport while flying from Brisbane to its Cloncurry home.

Photos taken by 'AC' and Michael Fleetwood  ©
Posted by Damian F at 9:56 PM