Photographed by local plane spotter Micah S last week at Bundaberg Airport was Seair Pacific's De Havilland DHC-6-100 Twin Otter VH-ZKF.  This was the first of two Twin Otters that Seair has acquired this year - the other being VH-BVS - see our photos of VH-BVS in our Blog Post HERE. 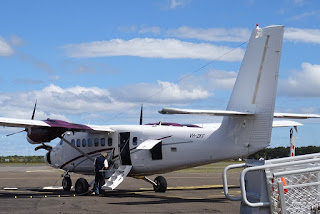 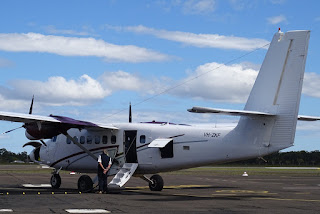 As we've mentioned previously, VH-ZKF was registered to Seair Pacific / Istlecote in mid-March this year after spending over a decade in Western Australia flying with the Karratha Flying Service.  The 'Twotter' was delivered to Seair's Gold Coast Airport base in late April. 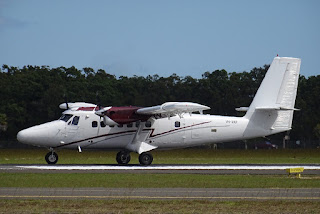 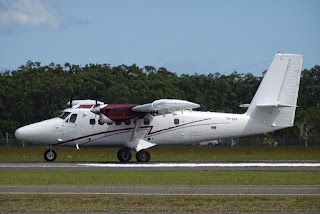 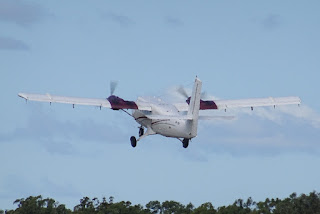 Research into this particular Twin Otter (MSN 43) also reveals that it has a historic link with Central Queensland.  The Twin Otter Spotter Blog and Twin Otter Archive websites both have a full history of the aircraft from the date is was rolled out of the De Havilland factory (29 March 1967) and when it completed its first flight (30 March 1967).

Flying as VH-TZL, this particular Twin Otter looked to arrive in Australia in 1978 and was operated by Aeropelican Intercity Commuter Services out of Newcastle (Belmont) Airport.  In 1981, VH-TZL then looked to move North and was seemingly operated out of Maryborough Airport - and perhaps other regional ports in CQ - for Noosa Air, Sunstate Airlines, Flight West Airlines and locally-based Whitaker Air Charter.

Information suggests that VH-TZL continued to be operated by Whitaker Air Charter until it was sold to the Karratha Flying Service and re-registered VH-ZKF in 2004.

Sincere thanks to Micah for taking the time to capture and send through these great photos of VH-ZKF!