A nice helicopter spotted at Rockhampton Airport on Monday 1 August in the form of Peninsula Helicopters / Heli-Serv (of Moorabbin in Victoria) Aerospatiale AS.355F1 Squirrel VH-ZKK. 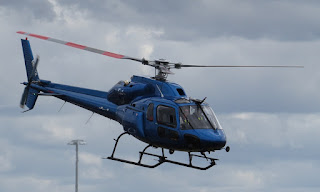 It is believed that VH-ZKK arrived into Rocky from the South on Sunday 31 July.

Meanwhile, the locally-based Capricorn Helicopter Rescue Service (CHRS) / Babcock Mission Critical Services Australasia Bell 412EP VH-EPR departed Rockhampton Airport late on Sunday 31 July for Bundaberg Airport and the Sunshine Coast.  I believe that on Monday 1 August, VH-EPR has positioned to Redcliffe where it could be about to undergo planned maintenance.

Sincere thanks to local plane spotter Kayanne H for taking the time to capture and send through these great photos.

All photos taken by Kayanne Hardsman  ©
Posted by Damian F at 10:10 PM