As well as the lovely Douglas C-47A (DC-3) VH-XUX visiting Longreach Airport during the week - see Blog Post below - there has been a nice selection of interesting light General Aviation (GA) aircraft and a nice bizjet to call into the Central West during the last few days.


On Tuesday 16 August, Gulf Coast Aviation Cessna 510 Citation Mustang bizjet VH-KXM was noted calling into Longreach Airport once again for fuel.  On this occasion, VH-KXM called in from Bankstown and later departed to Vanrook Station near Normanton.

Also on Tuesday 16 August, Darwin-based Vulcanair (Partenavia) P.68C VH-VMV passed through Longreach Airport while heading to Redcliffe from Mareeba.  I captured a photo of VH-VMV at the General Aviation (GA) area at Darwin Airport last week. 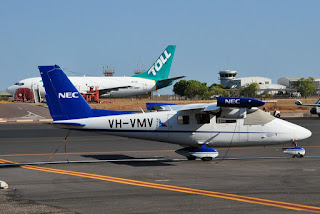 UPDATE!  On Wednesday 24 August, VH-VMV was re-registered to the Redcliffe Aero Club.
On Wednesday 17 August, Brescon (Toowoomba) Beech B200 VH-WXN visited from the Brisbane West Wellcamp Airport near Toowoomba.

UPDATE!  At the time of writing, VH-WXN was due to visit Longreach Airport again on Saturday 20 August, flying in from and later back to Brisbane.