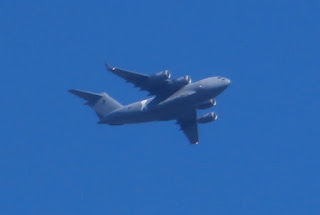 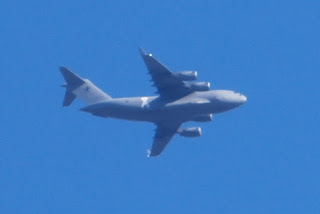 It was noted flying North from RAAF Base Amberley and initially completed a spectacular low overshoot at Maryborough Airport before venturing North and completing a missed approach at Rocky.  After completing its airwork, A41-206 departed Rockhampton on returned to Amberley.

Meanwhile, earlier on Thursday 4 August, an Australian Army NH Industries MRH-90 Multi-Role Helicopter was heard to overfly Rockhampton and land at Mackay Airport as "Checker 02".  The unidentified MRH-90 was then later noted arriving at Townsville.

Sincere thanks to local plane spotter Trevor H who popped outside his house for these couple of quick photos as the Globemaster climbed out of Rockhampton Airport.

All photos taken by Trevor Hardsman  ©
Posted by Damian F at 7:20 PM