On Wednesday 10 August, the often familiar sight in CQ of Earth Commodities Cessna 550 Citation Bravo bizjet VH-CCJ called into Mackay Airport.  On this occasion, it touched down from Cairns and Townsville, having flown up to Cairns, via Mount Isa, from its Brisbane base on Tuesday 9 August. 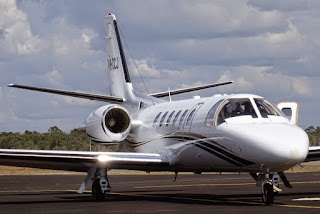 At the time of writing, VH-CCJ looks to be due to depart Mackay for Rockhampton Airport early on Thursday 11 August before heading onward to Bundaberg Airport in the early afternoon.

Finally, I also note that Professional Jet Aviation Cessna 525 Citation CJ1 bizjet VH-CDG is also due to call into both Rockhampton and Bundaberg Airports on Thursday 11 August from its Gold Coast base.