Due to having car repairs, I ventured to Emerald on both Monday 29 August and Tuesday 30 August and managed to make it Emerald Airport and capture some of the evening action.

On Monday 29 August, I was quite happy to capture a pair of Alliance Airlines Fokker F-70 jets - one of which was a newie for me!  F-70 VH-QQX was photographed departing Emerald Airport for Brisbane operating on behalf of Virgin Australia as VOZ1266. 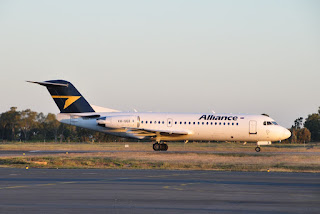 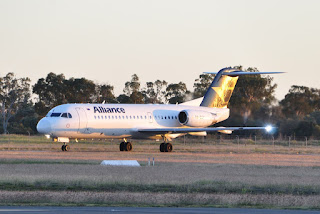 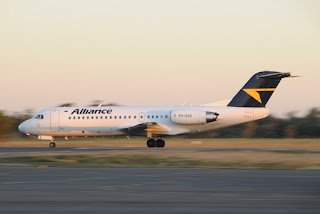 A little later - and at just about 'last light' - fellow Alliance F-70 VH-NKU touched down at Emerald Airport operating a Fly-in Fly-out (FIFO charter flight from Brisbane and the Sunshine Coast as UTY4078. 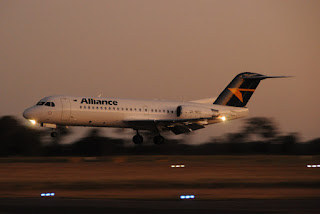 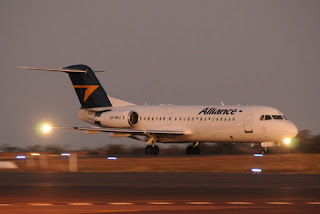 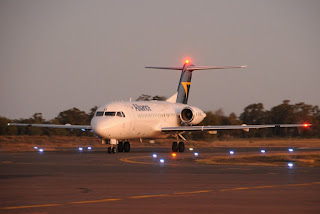 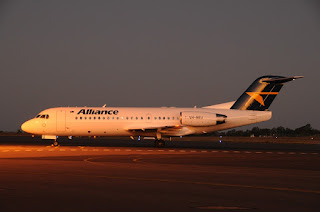 This was the first time I've properly seen and been able to photograph VH-NKU (c/n 11555) since it was delivered to Alliance Airlines in June 2015.  VH-NKU made at least one visit to Emerald in 2015 before then heading to Western Australia and operating out of Perth until May this year when it moved to Adelaide before returning to Brisbane.  Of interest, VH-NKU had previously been operated by Austrian Airlines as OE-LFK. 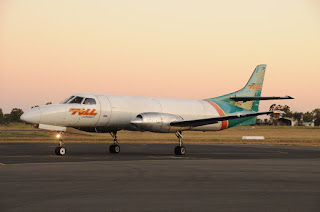 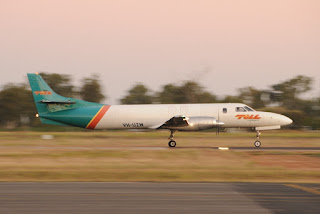 Back at Emerald Airport on Tuesday 30 August, I photographed Toll Freight Aviation / Toll Express Metro III VH-UZP in company with General Aviation Maintenance (GAM) AeroCommander 500-S VH-YJM which is currently based at Emerald Airport operating the Western freight run to Barcaldine and Longreach on a week-daily basis. 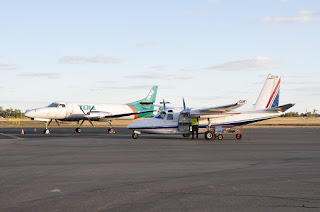 Around on the General Aviation (GA) Apron on Tuesday 30 August was SOCATA TBM-850 VH-KOF which had earlier arrived from Townsville.  It departed to Maitland (New South Wales) on Wednesday 31 August. 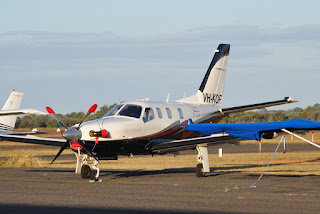 Also visiting Emerald Airport on Tuesday 30 August was Tasmanian-registered Cirrus SR22 VH-ZZD.  It had earlier arrived from Gladstone, where on Monday 29 August, it was believed that VH-ZZD had caused a QantasLink Dash-8-Q400 to 'go-around' after spending too much time on the Runway. 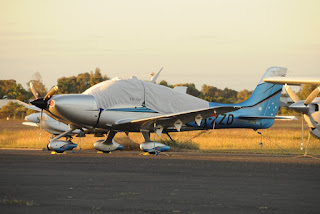 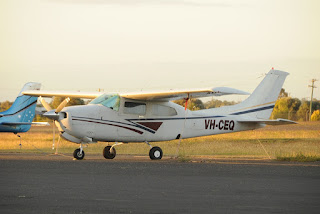 As this post is being written, I note that late on Wednesday 31 August, Royal Flying Doctor Service (RFDS) Pilatus PC-12/45 VH-NQB ("FlyDoc 428") has visited Emerald Airport calling in from Mantuan Downs Airport.  It has since returned to its Charleville base.

Another medical evacuation visitor we mentioned below that called into Emerald Airport on Tuesday 30 August was LifeFlight (ex Careflight Queensland) (Aeromed) LearJet 45 bizjet VH-VVI "Ambulance 451" was arrived from Mackay and later departed to Gladstone.  It remains unclear if its visit was medical-related or training.

Finally, back on Monday 29 August, FKG Air Hawker Beechcraft G58 VH-FKI called into Emerald Airport from Toowoomba.  It then flew to Wanella Station (near Coppabella) before returning to Toowoomba later in the day. Also, Beech A36 Bonanza VH-ILG was noted visiting from its Mackay Airport base.
Posted by Damian F at 8:31 PM