Alliance Airlines Fokker F-50 VH-FKX has returned to Longreach Airport once again late on Sunday 31 July.  It arrived from Darwin via Gove (Nhulunbuy) and Century Mine as UTY4467/4469/4471. 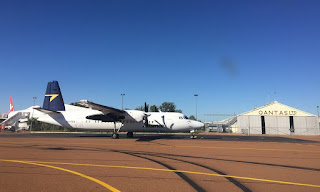 After staying for the night, VH-FKX was photographed resting nearby to the historic Qantas hangar early on Monday 1 August.

VH-FKX passed through Longreach Airport in mid-July heading North to Proserpine (Whitsunday Coast) Airport and ports around Far North Queensland and the Northern Territory on what looked to be a closed tourist charter.

Another PC-12 in the form of Brisbane-based Pilatus PC-12/47E VH-AAD was also noted visiting Longreach Airport but on Saturday 30 July.  It called in from Archerfield and later departed to Brunette Downs.

And a pair of Redcliffe Aero Club Cessna 172s VH-SPP and VH-YRE also arrived at Longreach Airport on Monday 1 August from Redcliffe and Roma.