Interesting to note that over the course of Saturday 6 April and Sunday 7 April, Corporate Air / Vee H Aviation Cessna 441 Conquest II VH-VEY passed through a couple of CQ Airports flying as "NavCheck 1". 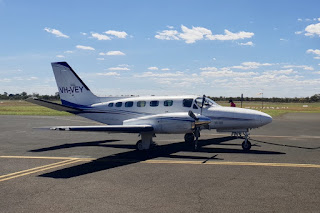 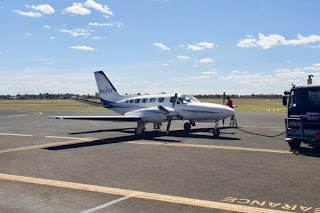 We have noted on previous occasions that Corporate Air Cessna Conquest aircraft have operated flight safety check sorties at CQ Airports and it appears that VH-VEY may be completing the same type of flights again.

On Sunday, VH-VEY then continued from Longreach Airport to Winton, Hughenden, Cloncurry before continuation to and landing at Mount Isa.

All photos taken by Zac Fitzgerald  ©️
Posted by Damian F at 7:31 PM