There continues to be many and varied Corporate Air  / Vee H Aviation aircraft coming and going at various Central Queensland Airports on various Fly-in Fly-out (FIFO) and other closed charter flights.

On Tuesday 9 April, SAAB 340B turboprops VH-VEF and VH-VEM were both noted flying into Roma Airport from Brisbane.  They both returned to the capital on what appears to be a Fly-in Fly-out (FIFO) charter flight.  VH-VEM was spotted at the Sunshine Coast (below) on Monday 8 April while operating from Brisbane to the Sunny Coast and Biloela / Thangool Airport also on a FIFO charter flight. 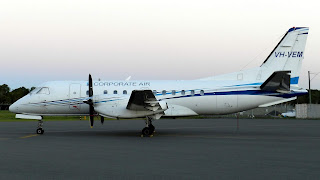 Also on a closed FIFO charter flight also on Tuesday 9 April was fellow SAAB 340B VH-VEP which was noted departing Theodore Airport for Brisbane.

Last Friday 5 April, Metro 23 VH-VEK was noted arriving into Rockhampton Airport from Cloncurry and Brisbane on what appears to possibly be a new Fly-in Fly-out (FIFO) run.  arrived from Cloncurry and Brisbane then departed to Brisbane.  While Cessna 441 VH-VEJ was noted flying into Rolleston Aerodrome from the North before later departing to Brisbane.

Their new SAAB 340B VH-VEB was noted completing the daily Regular Passenger Transport (RPT) flight from Brisbane to Biloela / Thangool Airport and back.