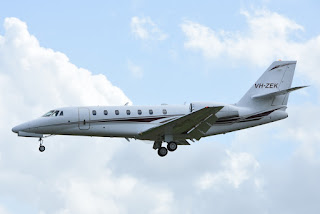 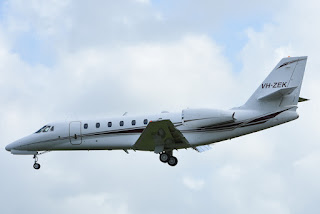 It looked to have a busy day of flying, initially departing Bankstown for Cairns before it started calling into most coastal towns along the Queensland coast.  It departed Cairns for Townsville and then Mackay before it then continued to Rockhampton where it was due to remain parked at Rockhampton Airport for the night.

At the time of writing, VH-ZEK is due to depart Rockhampton Airport for Bundaberg and Hervey Bay (Fraser Coast) Airports as its tour continues.

Meanwhile, also on Wednesday 3 April, a bizjet we haven't seen in Central Queensland for a couple of years made a return with Jetstream Aviation (Emprja P/L) Cessna 550 Citation II VH-VDF noted calling into Proserpine (Whitsunday Coast) Airport from its Sunshine Coast base.  It then departed Prosie for Cooktown.

UPDATE!  VH-VDF returned South from Cooktown to Proserpine (Whitsunday Coast) Airport on Saturday 6 April.  It then continued back to its Sunshine Coast base.

Finally, also on Wednesday 3 April, the familiar sight of Isle of Man-registered but Australian-based Piaggio P-180 Avanti II M-ETAL was noted flying into Bundaberg Airport once again.  It looked to return from Perth in Western Australia via Olympic Dam in South Australia.  M-ETAL then departed Bundy for Sydney.
Posted by Damian F at 8:04 PM