Noted arriving into Bundaberg Airport from Cairns on Monday 29 April to presumably take up operations in the area is the Fugro LADS Corporation / Surveillance Australia / Royal Australian Navy (RAN) LADS Hydrography Institute Dash-8-200 VH-LCL.  It was noted completed airwork off the coast of Gladstone and around Heron Island before heading to Bundy. 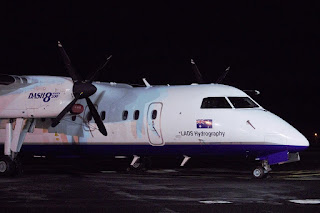 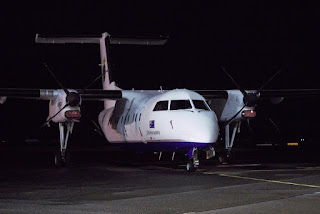 The heavily modified Dash-8-200 is usually based at Cairns Airport with Cobham Aviation.  At the time of writing, it is planned to complete a seven-hour flight out of and back to Bundaberg Airport on Tuesday 30 April with it planning to return to Bundaberg Airport in the early evening.

All photos taken by Samuel Felgate  ©
Posted by Damian F at 7:51 PM