During the afternoon on Tuesday 2 April, LifeFlight (Aeromed) LearJet 45 bizjet VH-CXJ "Ambulance 452" was spotted by me arriving into Mackay Airport. 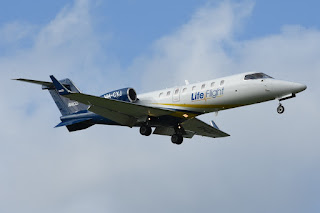 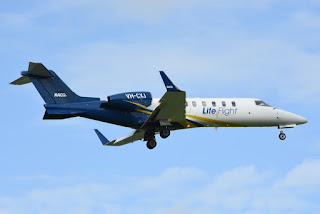 The LearJet arrived from Townsville and Horn Island Airport right on the tip of Cape York Peninsula.

After spending a couple of hours on the ground, VH-CXJ departed to its Townsville base.

Meanwhile, as this post is being written, late on Tuesday 2 April, fellow LifeFlight (Aeromed) Bombardier Challenger 604 bizjet VH-URR "Ambulance 604" is back in CQ having arrived into Blackall Airport from Brisbane.

It is due to fly across to Rockhampton Airport before later returning to Brisbane.
Posted by Damian F at 7:48 PM