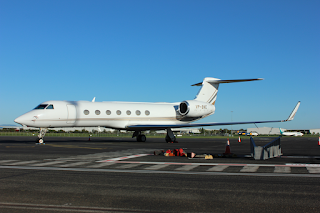 The sleek Gulfstream looked to arrive into Brisbane from overseas on Friday 29 March.  It is pictured above on Saturday 30 March.

At the time of writing, VP-BNE appears to be staying for at least the night.

Meanwhile, also on Monday 1 April, Brenzil Dassault Falcon 7X bizjet VH-CRW was able to land at Hamilton Island Airport.  It follows an unsuccessful visit last Thursday 28 March where it diverted to Mackay Airport (pictured) after weather prevented it from landing.


On Monday, VH-CRW again flew up from Brisbane and during the middle of the afternoon, it returned to the capital.