With the Central Queensland-based Federal Parliamentary seats of Flynn, Capricornia and Dawson some of the most marginal and thus more important ones during this Federal Election campaign, it came as no surprise that Federal Labor leader Bill Shorten continued his tour of North and Central Queensland on Tuesday 23 April, departing Townsville and calling into both Gladstone and Mackay before later returning North.

Mr Shorten and entourage were noted flying on board Royal Australian Air Force (RAAF) Boeing B737-7DT(BBJ) A36-002 which was noted departing Townsville for Gladstone Airport as "Envoy 86". 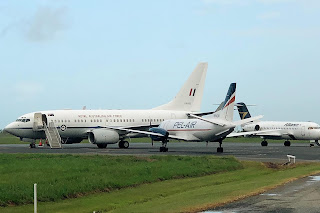 Also noted touching down at Gladstone Airport from Townsville also on Tuesday 23 April was Alliance Airlines Fokker F-70 VH-QQX.  It has been chartered to by the RAAF to transport media around the campaign trail with Mr Shorten.  VH-QQX was noted flying as "Envoy 85". 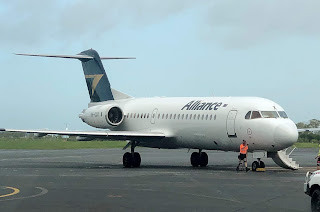 Engagements complete in the Port City, both A36-002 and VH-QQX departed Gladstone Airport for Mackay Airport where they were spotted (above) soon after touching down in the Sugar City.

After more engagements, both A36-002 "Envoy 86" and VH-QQX "Envoy 85" both departed Mackay Airport and returned to Townsville.


As posted above, VH-SCR was noted carrying Deputy PM and Leader of the Federal National Party Michael McCormack to join the hustings in the region.

Finally, of interest, the other RAAF B737-7DT(BBJ) A36-001 is being used by Prime Minister Scott Morrison with Alliance Fokker F-70 VH-JFE being used to transport the media contingent.  Both aircraft were in Adelaide on Tuesday 23 April.

Another interesting visitor to Adelaide on Tuesday 23 April was the RAAF's first Dassault Falcon 7X bizjet A56-001 which arrived from Canberra as "Regent 25" - as shown below. 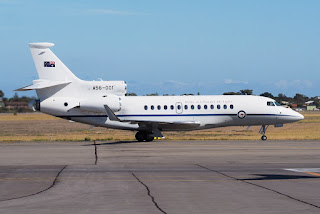 A56-001 is the first of three leased Dassault Falcon 7X bizjets acquired to replace the three Bombardier Challenger 604 bizjets currently operated by 34 Squadron.  A56-001 arrived in Canberra from overseas last Tuesday 16 April.  As shown, it also wears the familiar RAAF VIP fleet colours.

Hopefully we see these in CQ soon!