Much to our surprise, the first of 10 QantasLink Dash-8-Q400 Next Gen turboprops has recently emerged from the paint-shop looking resplendent after being re-painted into the new Qantas 'Silver-Roo' colour scheme. 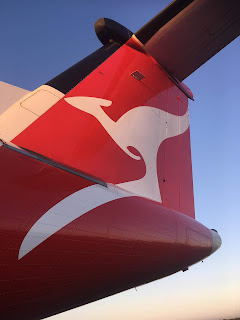 On Sunday 7 April, VH-LQL emerged from the Flying Colours paint-shop in Townsville and almost immediately visited Central Queensland Airports.  It was noted calling into Hamilton Island Airport on the QLK2503/2504 service from and back to Cairns on Monday 8 April.

Sadly though for spotters in Central Queensland, VH-LQL has since remained operating out of Cairns and Townsville on Far North Queensland services ever since until the time of writing.

As mentioned, VH-LQL is the first Dash-8-Q400 Next Gen to be re-painted in the new and updated Qantas livery and kangaroo logo, which was introduced to coincide with the introduction the Boeing B787 Dreamliner into service with the airline in 2017.  All of the 'classic' Dash-8-Q400 aircraft have already been re-painted so the new livery is becoming quite a common sight at most Central Queensland Airports.

Of interest, during 2015, VH-LQL was named 'Taronga' and painted in an attractive livery promoting the Taronga Western Plains Zoo at Dubbo.  Once the livery was removed however, the aircraft didn't appear to then carry a name.

At the time of writing, it is unclear what name the Dash-8 has now been given.

Finally, it now appears that fellow Dash-8-Q400 Next Gen VH-LQH is now in the paint-shop at Townsville and is expected to emerge next week in the new Qantas/QantasLink livery.

UPDATE!  Finally! On Sunday 28 April, local plane spotter Anthony S was able to capture out first photos of VH-LQL in new colours as it visited Gladstone Airport operating as QLK2338/2339 from and back to Brisbane. 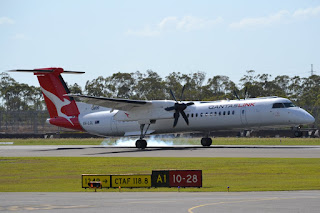 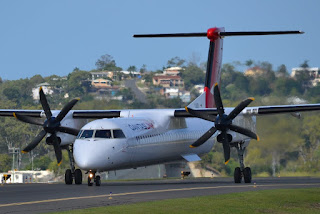 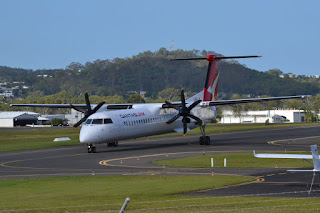 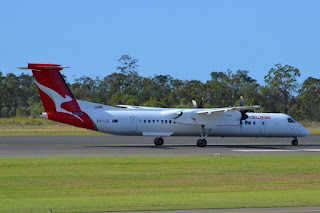 It was confirmed that VH-LQL has now been named 'Jindabyne' after being unnamed since it was re-painted into 'standard' livery following it being named 'Taronga'.