The second of 10 QantasLink Dash-8-Q400 Next Gen turboprops has emerged from the paint-shop looking resplendent after being re-painted into the new Qantas 'Silver-Roo' colour scheme. 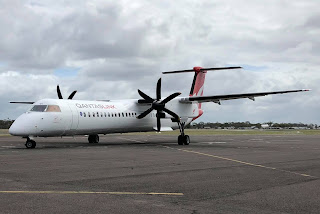 Last Friday 19 April, VH-LQH emerged from the Flying Colours paint-shop in Townsville and immediately visited Central Queensland Airports.  It was noted calling into Hamilton Island Airport on the QLK2503/2504 service from and back to Cairns. VH-LQH then passed through Mackay Airport late on Sunday 21 April before spending the night at Rockhampton Airport. 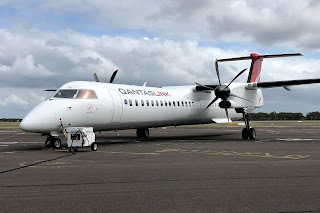 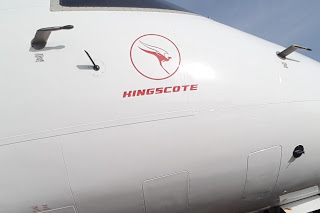 On Monday 22 April, after departing Rockhampton Airport and operating a return flight to Hervey Bay (Fraser Coast) Airport, VH-LQH was then photographed above at Bundaberg Airport.

As shown, VH-LQH has now been named 'Kingscote' having been previously unnamed since it entered service with the airline in 2013.

As mentioned, VH-LQH is the second Dash-8-Q400 Next Gen to be re-painted in the new and updated Qantas livery and kangaroo logo, which was introduced to coincide with the introduction the Boeing B787 Dreamliner into service with the airline in 2017.  It joins VH-LQL which emerged from the Flying Colours paint-shop a couple of weeks ago, although it is still yet to make an appearance in Central Queensland.

It now appears that fellow Dash-8-Q400 Next Gen VH-LQF is now in the paint-shop at Townsville and is expected to emerge next week in the new Qantas/QantasLink livery.