During the late afternoon on Monday 1 April, Isle of Man-registered but Australian-based Piaggio P-180 Avanti II M-ETAL was noted flying into Bundaberg Airport.  It looked to arrive from its Coffs Harbour base in New South Wales. 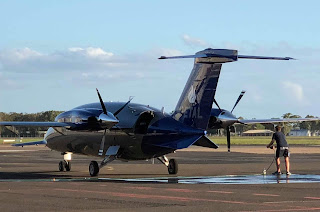 M-ETAL was photographed (above) being prepared for departure early on Tuesday 2 April.

It later departed Bundy for Olympic Dam Airport in South Australia before continuing into Western Australia and calling into Kalgoorlie and then Perth.

Meanwhile, also noted visiting Bundaberg Airport also on Tuesday 2 April was the familiar sight of Bontrail (Strahman Farms) Cessna 208 Caravan VH-SJJ.  It looked to arrive from and then depart back to its Toowoomba base.