With the Federal Government election coming up in May, Australian Deputy Prime Minister and Federal leader of the National Party of Australia Michael McCormack was noted visiting CQ this week on board Royal Australian Air Force (RAAF) Canadair CL-600-2B16 Challenger 604 bizjet A37-003.

The Challenger, which is flown by the VIP 34 Squadron in Canberra, was initially noted arriving into Gladstone Airport late on Tuesday 9 April from RAAF Base East Sale in Victoria as "Regent 12".

Then on Wednesday 10 April, A37-003 again as "Regent 12" departed Gladstone Airport and completed the short hop to Rockhampton Airport where Mr McCormack completed more engagements. 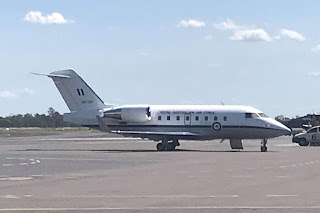 With these complete, he and the Challenger departed Rockhampton Airport for Wagga Wagga in New South Wales.

Expect more visits by the RAAF VIP jet fleet over the next few weeks!

Finally, after we mentioned it on our Facebook page last week, it has now been confirmed by Defence that the Royal Australian Air Force (RAAF) has leased three Dassault Falcon 7X bizjets to replace the Challenger 604 bizjets currently operated by the VIP 34 Squadron in Canberra as VIP special purpose aircraft (SPA).

The first of the three aircraft was recently photographed ferrying from Dassault’s Merignac facility near Bordeaux, France, to a cabin interior finishing centre in Little Rock, Arkansas.  It wears the serial A56-001 and was painted in familiar RAAF VIP fleet colours.