On Thursday 21 May, Alliance Airlines Fokker F-70 jet VH-NUU was spotted at Rockhampton Airport.  The distinctive little Fokker was noted be operating one of the twice weekly (Wednesday and Thursday) closed Fly-in Fly-out (FIFO) charter flight from and back to Brisbane as UTY8448/9. 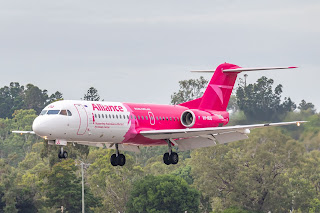 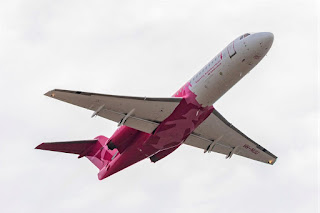 As can be seen and as mentioned before, Alliance Airlines is continuing its partnership with Breast Cancer Network Australia (BCNA) by operating this specially themed Fokker F-70 VH-NUU in full BCNA colours - supporting Australians affected by breast cancer.  The distinctively coloured F-70 named 'Pink Lady' has been designed by Lila Design in Tilburg, The Netherlands (EU).

Meanwhile, it was reported today that Alliance Airlines' ability to adapt its planes for coronavirus has helped it to increase profits this financial year by $7 million.

They said that their "pioneering" measures, including social distancing seating plans, new cleaning regimes and passenger temperature checks, have been adopted by much of Australia’s industry.

"The swift and flexible response has seen Alliance capitalise on additional demand for flights in the resource sector and, particularly, increases in flight schedules of contracted clients," Alliance said in a statement to the ASX.

This financial year, Alliance expects to make $40 million in profit before tax, up from $32.8 million in 2019.

Indeed we've seen a massive rise in Alliance Airlines Fokker F-70 and F-100 jet aircraft completing closed FIFO charter flights of late within the Central Queensland region.  As well as the two weekly flights to Rocky each week, Alliance continues to complete eight return FIFO charter flights to Mackay Airport each Tuesday, Wednesday and Thursday.  While out at Emerald and Moranbah Airports, over the last week or so there has been over 20 flights that have called in between these FIFO hubs and the South-East corner of the state.

Sincere thanks to local plane spotter Steve V for allowing us to share his great photos of VH-NUU!