Also on Thursday 14 May, Royal Australian Air Force (RAAF) Boeing C-17A Globemaster III A41-211 was photographed as it completed airwork during the day at Rockhampton Airport. 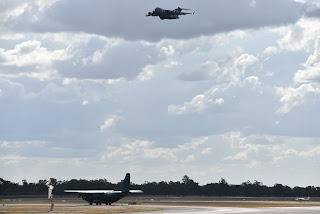 A41-211 was flying as "Stallion 40" and initially departed RAAF Base Amberley along with RAAF Airbus A330-200 / KC-30A Multi Role Tanker Transport (MRTT) A39-002 "Dragon 47", with both aircraft seemingly completing air-to-air refuelling off the coast North-East of Mackay.  The KC-30A returned to Amberley but the Globemaster continued up to land at Townsville for a short time.  A41-211 then departed Townsville and was photographed as it approached Rockhampton Airport where it completed a missed approach. 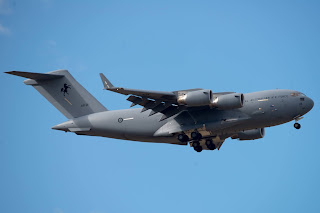 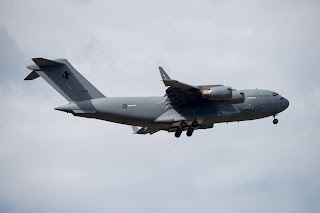 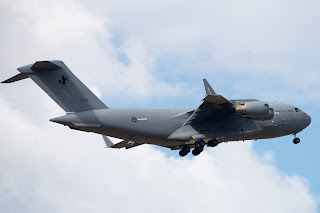 With the airwork complete, A41-211 "Stallion 40" continued back to Amberley. 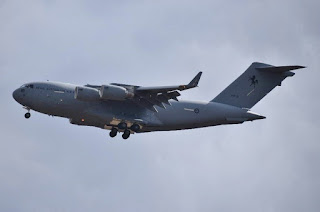 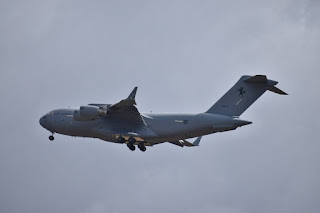 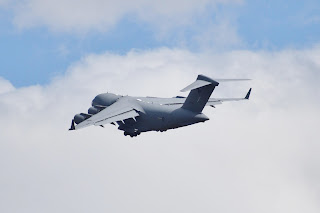 UPDATE!  As this post is being prepared, during the evening also on Thursday 14 May, A41-211, now as "Stallion 41", was in the air again, and again with RAAF KC-30A A39-002 "Dragon 51".  A41-211 looked to fly up to Townsville and then headed back down to Amberley, via airwork including missed approaches at Hamilton Island Airport and again at Rockhampton Airport.

Of interest, also during the day, also on Thursday 14 May, another RAAF C-17A Globemaster A41-209 as "Stallion 42" also completed air-to-air refuelling exercises in the area with another RAAF KC-30A A39-003 as "Dragon 50".  They appeared to complete the exercises off the coast of Townsville with the KC-30A eventually returning to Amberley, while the C-17A completed airwork at Cairns before returning to Amberley as well.

Of further interest was that also on Thursday 14 May, another RAAF KC-30A A39-005 as "Dragon 55" flew up from RAAF Base Amberley via an inland route to Darwin with RAAF McDonnell Douglas F/A-18A/B classic Hornets from 77 Squadron in tow which were heard using the radio callsign  of "Odin".  The Hornets eventually landed at RAAF Base Tindal near Katherine also in the Northern Territory.

Sincere thanks again to local plane spotters Scott H and Michael M for again taking hte time to capture and send through these great photos!