During the late afternoon on Tuesday 19 May, Royal Australian Air Force (RAAF) Airbus A330-200 / KC-30A Multi Role Tanker Transport (MRTT) A39-004 was spotted completing a missed approach at Rockhampton Airport. 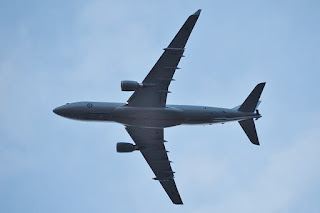 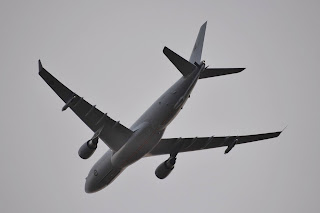 It was noted flying as "Dragon 70" and came up from RAAF Base Amberley to Rocky before continuing up to Cairns where it also completed a missed approach.  A39-004 then returned to Amberley.

Meanwhile, as this post is being written, also late on Tuesday 19 May, RAAF Boeing C-17A Globemaster III A41-212 has just completed airwork including missed approaches at both Proserpine (Whitsunday Coast) and Rockhampton Airports.  It was flying as "Stallion 60" and also departed Amberley and headed to Prosie via an inland route overhead Emerald.  After the airwork at Rocky, A41-212 returned to Amberley.

Finally, earlier in Tuesday 19 May, it's worth nothing that A41-212 - but as "Stallion 57" - was in the air and in the region, completing air-to-air refuelling exercises with a further pair of RAAF KC-30A MRTT refuelling aircraft A39-002 and A39-005 which were flying as "Thumper 01/02".  All three aircraft flew out of and back to RAAF Base Amberley and flew up as far as Townsville off the Queensland coast with the C-17 A41-212 also noted landing at Townsville for a short time.

All photos taken by Michael Malick  ©️
Posted by Damian F at 9:34 PM