On Sunday 24 May, and for the fourth time over the last week, the Queensland Police Service (Airwing) (State of Queensland) Cessna 560 Citation Ultra bizjet VH-PSU was spotted visiting Rockhampton Airport on what appeared to be another training flight. 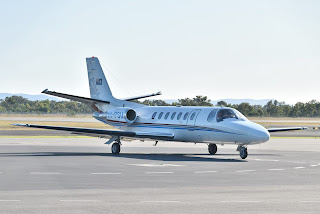 As it has done on the other occasions it visited the beef capital, VH-PSU arrived from Brisbane.  After parking for a short time, VH-PSU then departed but completed a series of circuits and missed approaches before it eventually returned to Brisbane.

While a few other light General Aviation (GA) aircraft were also noted visiting Rockhampton Airport, also on Sunday 24 May, including Aero Professional Services Piper PA-46-310P Malibu VH-BGK which visited from Emerald, while Flight One (Services) Beech B200 King Air VH-FON visited from Archerfield.

Up at Mackay Airport, also on Sunday 24 May, Brisbane-based Hewitt Cattle Australia P/L SOCATA TBM 700 VH-PGA was noted visiting from its Archerfield base.