After a short time on the ground, VH-NSQ departed Hervey Bay Airport and returned to Bankstown again via Coffs Harbour.

Meanwhile, also on Wednesday 6 May, Brisbane-based Bishopp Aviation SOCATA TBM-700 VH-VSV popped into Rockhampton Airport from Atherton in Far North Queensland.  It then departed to Archerfield.

While yet again, also on Wednesday 6 May, Seair Pacific / Istlecote DHC-6-100 Twin Otter VH-ZKF arrived into Rockhampton Airport from the Gold Coast and Brisbane before it then departed to Collinsville Aerodrome and Townsville.  It later returned to Collinsville Aerodrome and Rockhampton Airport before heading 'home' to the Gold Coast via Brisbane.

And CJ Aerospace (Altitude Aviation) Raytheon B200 King Air VH-EEL was noted arriving into Charters Towers Aerodrome from its Archerfield base via the Sunshine Coast also on Wednesday 6 May.

UPDATE!  On Thursday 7 May, VH-EEL returned to Archerfield via the Sunny Coast. 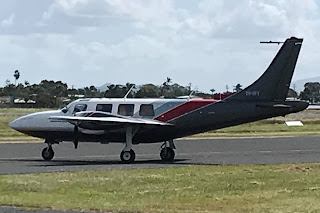 Also on Tuesday 5 May, Sydney Skydivers Cessna 208 Caravan VH-XLV was noted passing through Roma Airport while heading (back) North to Cairns from Bankstown.  It had flown down to Bankstown again via Roma Airport on Sunday 3 May.