Certainly a nice surprise on Thursday 14 May to see Machjet (Machjet International) Hawker Beechcraft B200 King Air VH-ZSY at my local Clermont Aerodrome.  The bright yellow King Air had earlier arrived from its Sunshine Coast base via Brisbane. 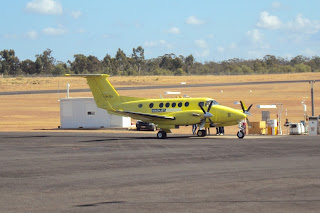 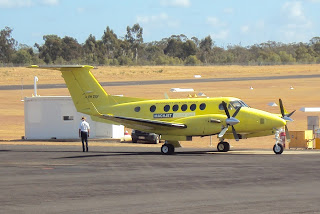 VH-ZSY then departed Clermont Aerodrome for Hervey Bay (Fraser Coast) Airport and Toowoomba before later returning to Brisbane and the Sunshine Coast.

As mentioned previously, Machjet (Machjet International) took delivery of the bright yellow King Air in August last year via the McDermott Aviation Group hangar at the Sunshine Coast.  It was previous operated in Norway by Lufttransport and wore Norwegian registration marking LN-LTK.

It was to be prepared for aeromedical use but has since had seats installed and is currently being utilised to carry passengers around Australia on private charter flights.