Yet again, over the early part of this week, the amount of closed general and Fly-in Fly-out (FIFO) charter flights into Central Queensland Airports shows no sign of reducing with many flights touching down at Moranbah and Emerald Airports, plus also Mackay and Rockhampton Airports.


Alliance Airlines Fokker F-100 VH-UQG in Moth Minor colours called into Mackay Airport on Tuesday 12 May.  It then operated into Cloncurry Airport early on Wednesday 13 May and was photographed as it prepared for departure back to Brisbane. 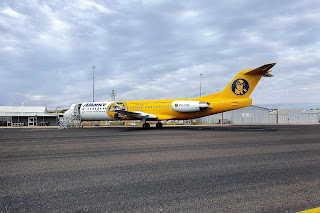 Fellow Alliance Airlines F-100 VH-UQC was photographed shortly after arriving into Emerald Airport from Brisbane and the Sunshine Coast late on Monday 11 May. 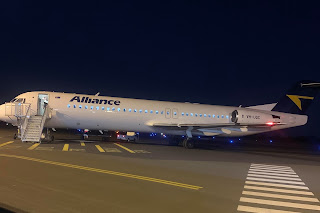 It seems that with large amount of Alliance Airlines aircraft moving around the country – they are completing many various charter flights pretty much all over mainland Australia at the moment – some of their Fokker F-70 and F-100 aircraft are making rare appearances in our region after with being temporarily grounded or operating out of another capital city other than Brisbane.

Of interest about REX this week is that media reported quite widely that they plan to capitalise on the turmoil from Virgin Australia’s collapse and invest $200 million launching capital city services to compete with Qantas, Jetstar and Virgin Mark II.  REX aims to rival Qantas, Jetstar and Virgin Australia by expanding its network to service capital cities by early next year.  Watch this space!

Finally, Fly Corporate (Corporate Air) and Hevilift continue to operate various general and FIFO charter flights in and out of the region.  Both airlines aircraft – SAAB 340B and ATR 43/72 aircraft respectively – have again been noted visiting Emerald, Moranbah and Mackay Airports on flights mostly out of Brisbane and also some from Townsville by Hevilift.