Late on Wednesday 20 May, Royal Australian Air Force (RAAF) Airbus A330-200 / KC-30A Multi Role Tanker Transport (MRTT) A39-004 was back in Central Queensland and was spotted completing a missed approach at Mackay Airport.  It looked to fly up from RAAF Base Amberley and was heard to be flying as "Dragon 71". 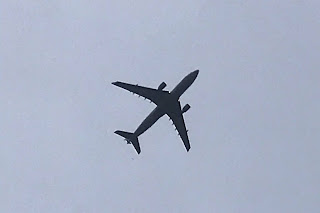 The KC-30A then continued up to Cairns where it completed more airwork before then flying back South and completing a missed approach at Rockhampton Airport.

Meanwhile, also late on Wednesday 20 May, RAAF Alenia C-27J Spartan transport aircraft A34-006 was noted flying around Bundaberg and the Wide Bay region on a training flight out of Amberley as "Kaos 64".

Photo and video taken by 'JM' and Mike Manning  ©️
Posted by Damian F at 9:58 PM