After arriving the previous evening, early on Wednesday 6 May, I was able to take a couple of quick photos as Hevilift Australia (Fixed Wing Division) ATR 72-500 VH-FVH at is was preparing to depart my local Clermont Aerodrome for Brisbane.  It flew to the capital as HT702. 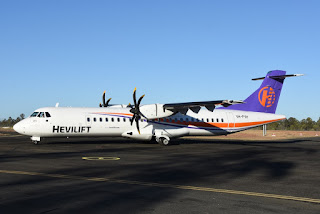 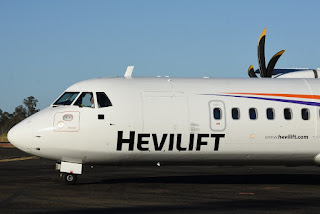 Meanwhile, also this week, fellow Hevilift Australia ATR 72-500s VH-FVM and VH-YWV have been kept busy with other various closed charter flights in and out of the region.

While VH-YWV visited Moranbah Airport both on Tuesday 5 May and Wednesday 6 May, both times arriving from and departing back to Brisbane.

Finally, the Hevilift Australia ATR 42-320 VH-YWH has also been in and out of the region and currently seems to spend a lot of time operating out of Townsville.  This week, it has visited both Emerald and Moranbah Airports at different times, completing flights from and to both Townsville and Brisbane.
Posted by Damian F at 7:38 PM