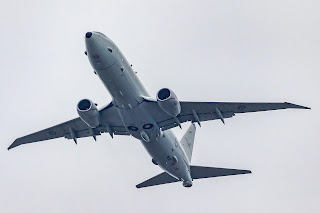 On Tuesday, Poseidon A47-012 (pictured above at Rockhampton Airport yesterday) was heard to be flying as "Mariner 03" and looked to depart Townsville and headed home to RAAF Base Edinburgh in South Australia via airwork at Mackay Airport, as well as the Gold Coast and RAAF Base Richmond.

While Poseidon A47-010 was heard to be flying as "Mariner 04" and also departed Townsville for Edinburgh but via airwork at Emerald Airport, as well as the Sunshine Coast and RAAF Base Williamtown.

Finally, its worth noting that also on Tuesday 19 May, another Poseidon A47-011 flying as "Blackcat 03" flew up from Edinburgh and joined fellow RAAF Boeing B737-7ES / E-7A Wedgetail Airborne Early Warning & Control (AEW&C) aircraft A30-002, which was flying as "Mitchel 03", on an air patrol along the Queensland and New South Wales border.  After some time, they both returned to their respective home bases - Edinburgh and the RAAF Base Williamtown for the Wedgetail.

Great visitors to the region!  We hope to see more of their RAAF’s P-8A Poseidon aircraft again soon!