On Tuesday 19 May, Regional Express (REX) SAAB 340B VH-REX was spotted at Rockhampton Airport after earlier arriving from Brisbane as RXA9282 on what seems to be now the weekly closed charter flight.  It then departed for Richmond again as RXA9282. 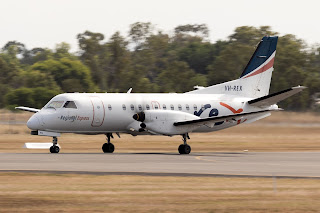 VH-REX was then due to return to Brisbane via Emerald Airport but ended up flying directly back to the capital but as RXA9883.

Of interest, fellow REX SAAB 340B VH-ZLH was noted visiting Emerald Airport also on Tuesday 19 May also on a closed charter flight.  It arrived from and later departed back to Brisbane but as PFY9872/9273.

VH-ZLH then departed Brisbane to Richmond as PFY9280 before it then called back into Emerald Airport for fuel before continuing back to Brisbane as PFY9881.

Meanwhile, after arriving into Rockhampton Airport the previous day, also on Tuesday 19 May, Gulf Coast Aviation Textron Aviation (Cessna) T206H VH-KQM was noted back to Townsville and then its Vanrook Station home.

Finally, Raytheon A36 Bonanza VH-YGM was also noted visiting Rockhampton Airport, also on Tuesday 19 May, arriving from and later departing back to its Orange base in New South Wales.  As previously mentioned, VH-YGM appears to be a weekly visitor to the beef capital.