On Friday 22 May, and for the third successive day, the Queensland Police Service (Airwing) (State of Queensland) Cessna 560 Citation Ultra bizjet VH-PSU was spotted visiting Rockhampton Airport on what appeared to be another training flight. 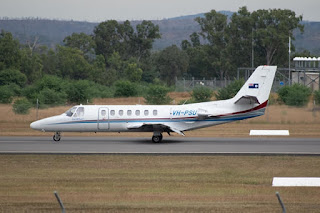 As it has done on the other occasions it visited the beef capital, VH-PSU arrived from Brisbane, although it completed a missed approach prior to coming back around and landing.  VH-PSU then departed but completed a simulated engine failure on take-off before coming back around and landing again.  A short time later, VH-PSU actually departed Rockhampton Airport and returned to Brisbane.

While returning to Rockhampton Airport for the second time this week, also on Friday 22 May, was Gulf Coast Aviation Textron Aviation (Cessna) T206H VH-KQM.  It again landed from its Vanrook Station home up near Normanton via Townsville.

Out at Longreach Airport, also on Friday 22 May, Brisbane-based Hewitt Cattle Australia P/L SOCATA TBM 700 VH-PGA was noted departing to Ambalindum Station in the Northern Territory.  It had arrived the previous day from Archerfield and Moura Airport.

UPDATE!  On Saturday 23 May, VH-PGA ferried back through Moura Airport while returning from Ambalindum Station to Archerfield.

Finally, noted visiting Rockhampton Airport but on Thursday 21 May, was Brisbane-based Pilatus PC-12/47E VH-VTF.  It arrived from Archerfield and departed to Glen Innes in New South Wales.