A few other interesting visitors to Rockhampton Airport - and the region - also on Monday 18 May, including the Queensland Government Airwing (State of Queensland) Raytheon Hawker 850XP bizjet VH-SGY. 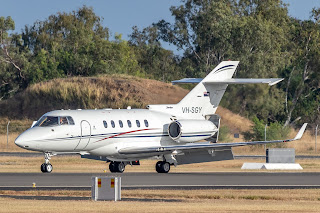 It looked to arrive from and some time later, depart back to Brisbane.

Meanwhile, a little earlier, Austrek Aviation Beech B200 King Air VH-WXO was spotted visiting Rockhampton Airport.  It arrived from Toowoomba and Archerfield and is pictured departing back directly to Toowoomba. 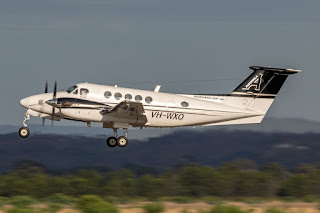 Back at Rockhampton Airport, the Queensland Police Service (Airwing) (State of Queensland) Raytheon B1900D VH-PSK called in during a busy day of flying out of and back to Cairns.  It also was noted calling into Mackay Airport.

UPDATE!  On Tuesday 19 May, VH-KQM was noted returning back to Townsville and then its Vanrook Station home.

Finally, it's worth noting that on Sunday 17 May, Fly Corporate (Corporate Air) SAAB 340B+ (WT) VH-VEP also visited Rockhampton Airport from Brisbane.