News has come through that one of my favourite aircraft currently flying around Australia will fly no more after today - Wednesday 30 July. 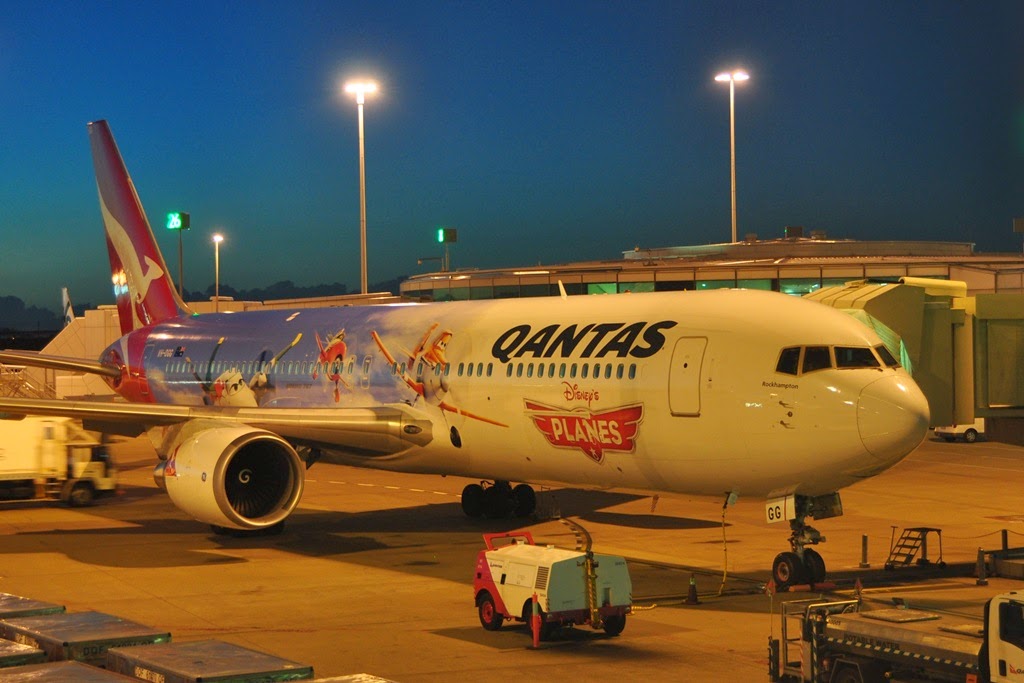 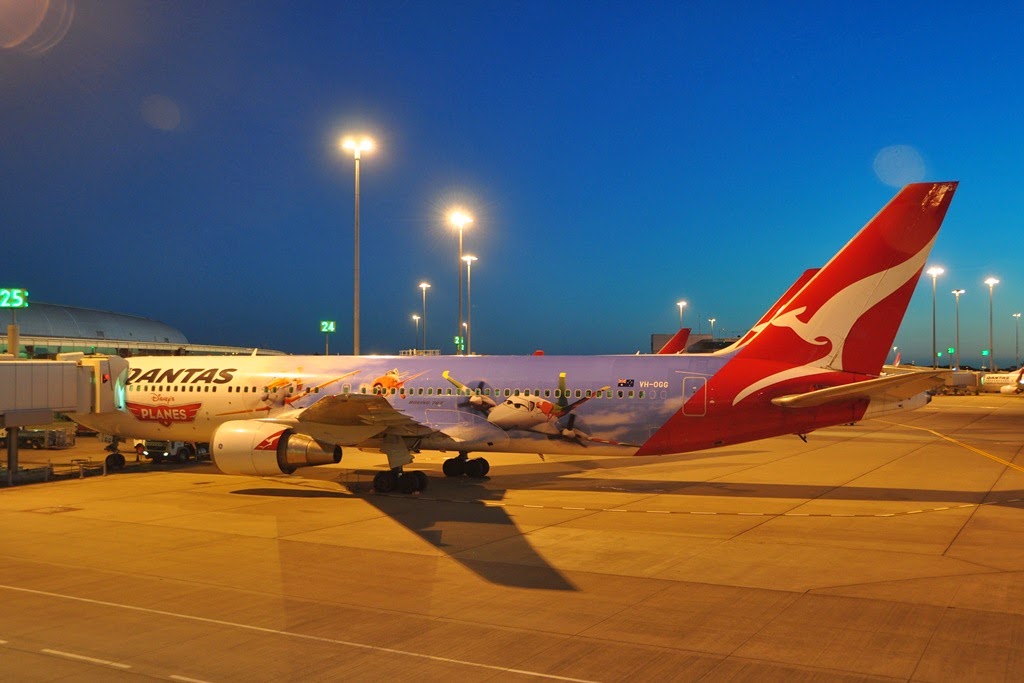 Qantas Airways Boeing B767-338(ER) VH-OGG - named "City of Rockhampton" - is due to operate its final ever passenger service for the airline today.

Fortunately for us in Central Queensland and in Far North Queensland, VH-OGG called into Cairns Airport on a scheduled service from Sydney on Monday 28 July - it even overflew me in Clermont!  Sincere thanks to the FNQ Skies Blog for sending through these fantastic photos from a wet Cairns! 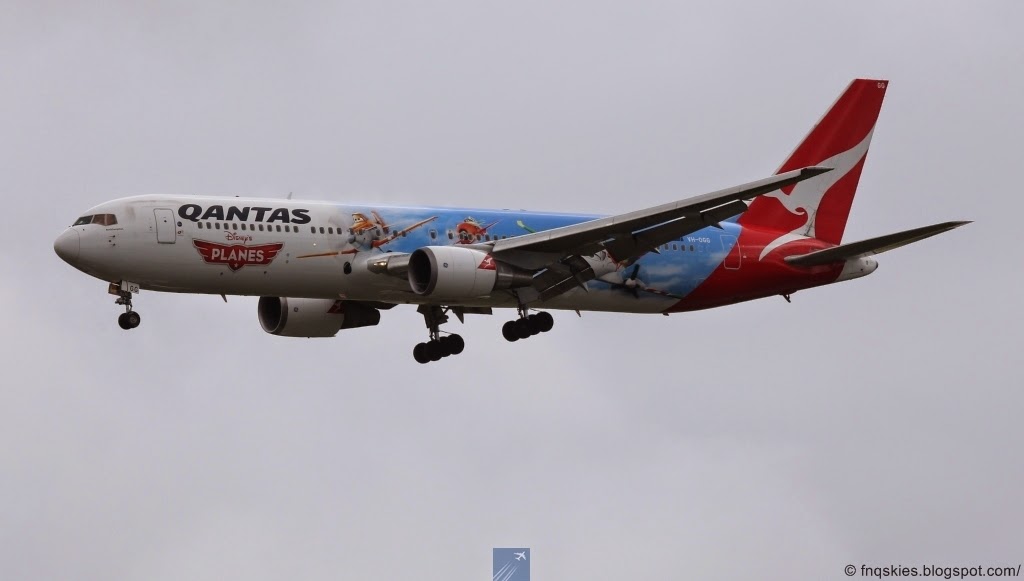 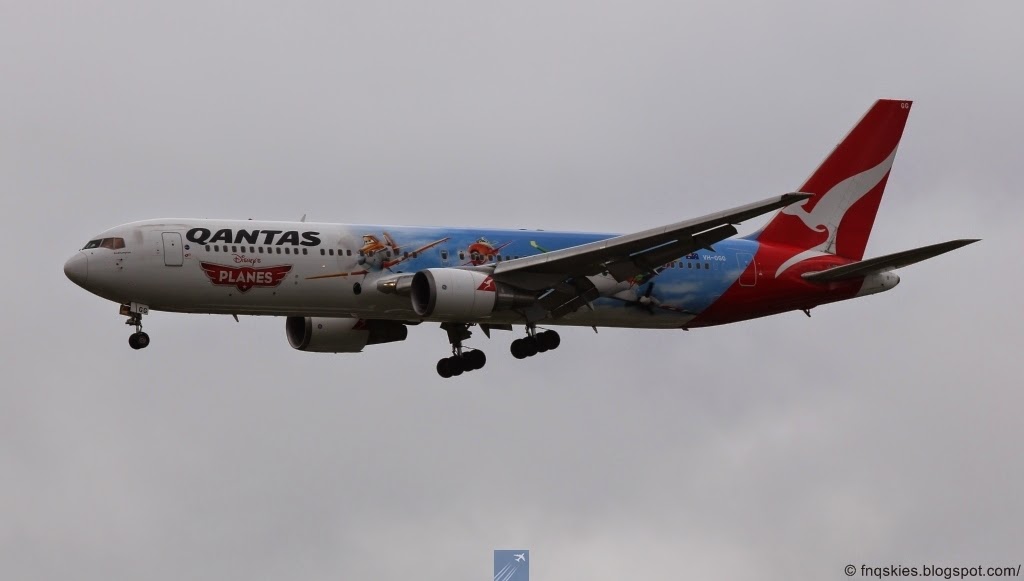 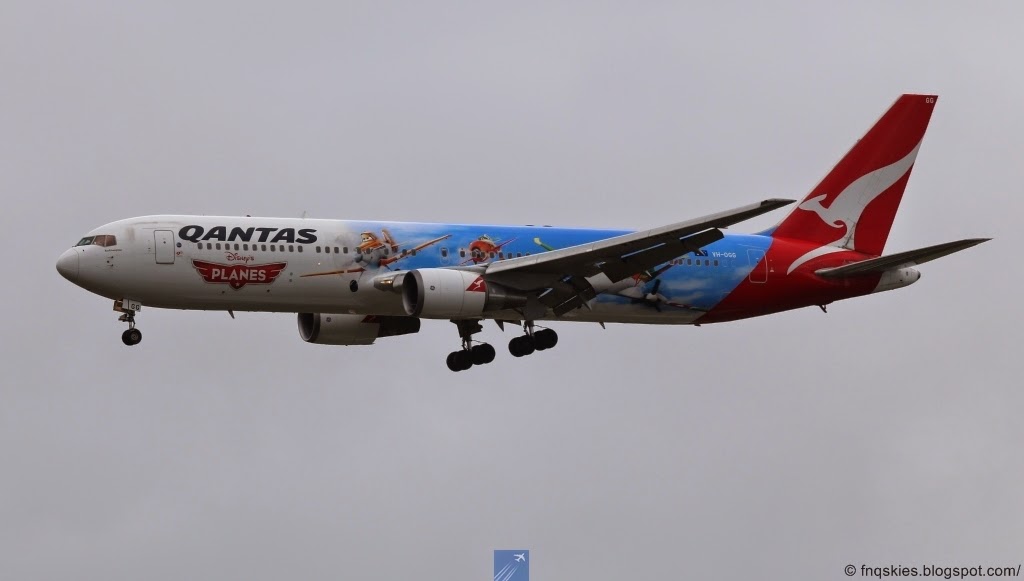 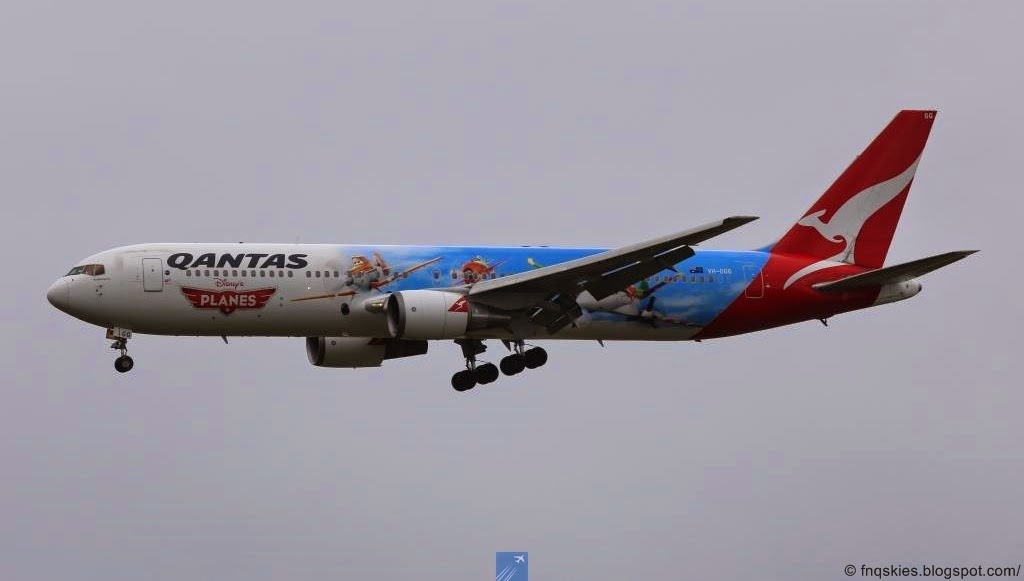 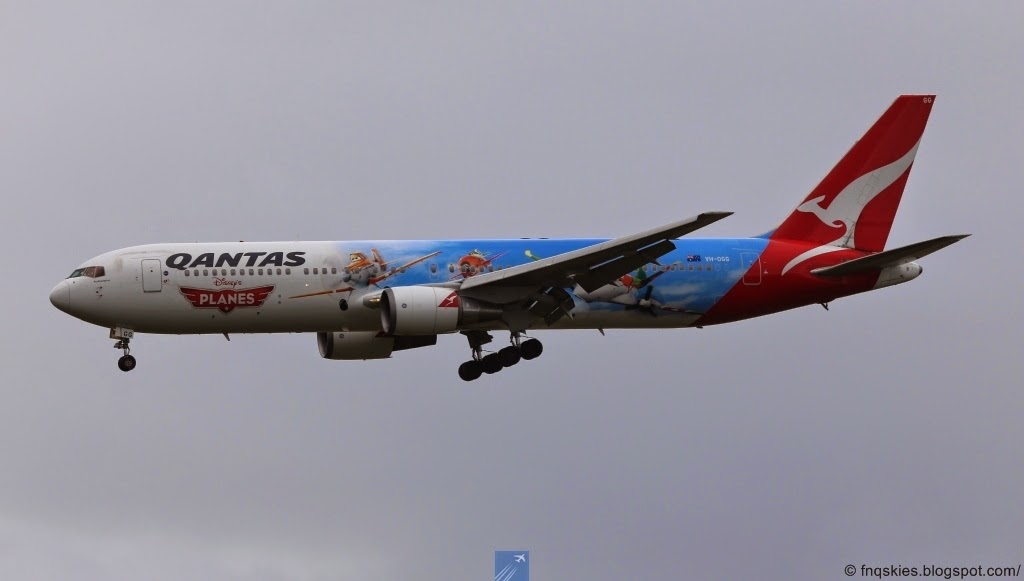 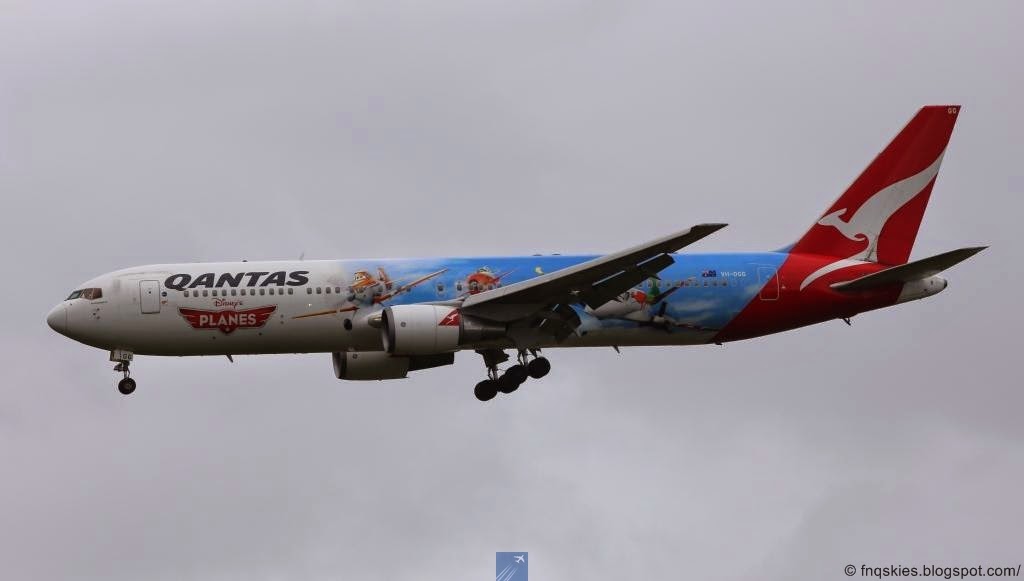 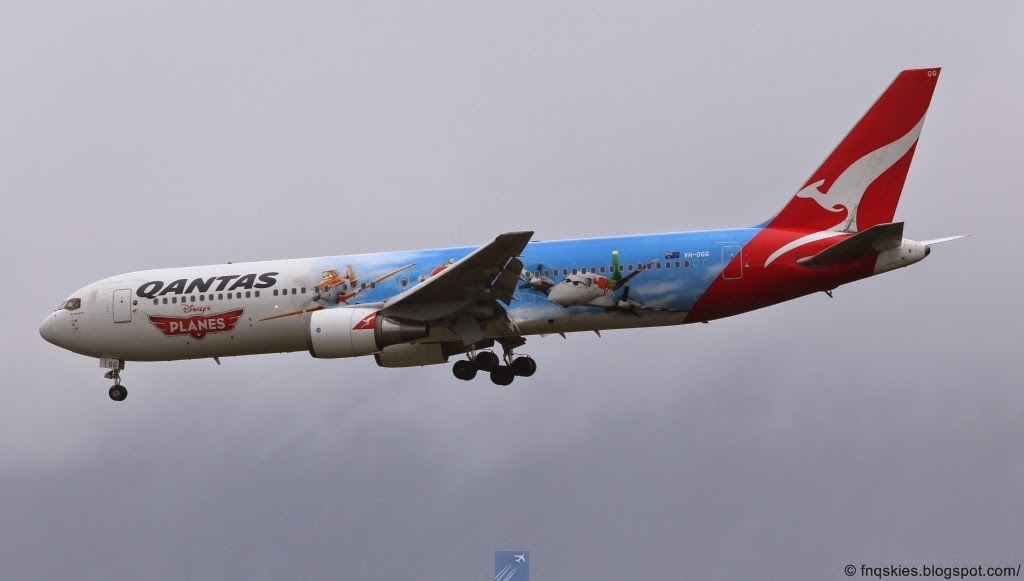 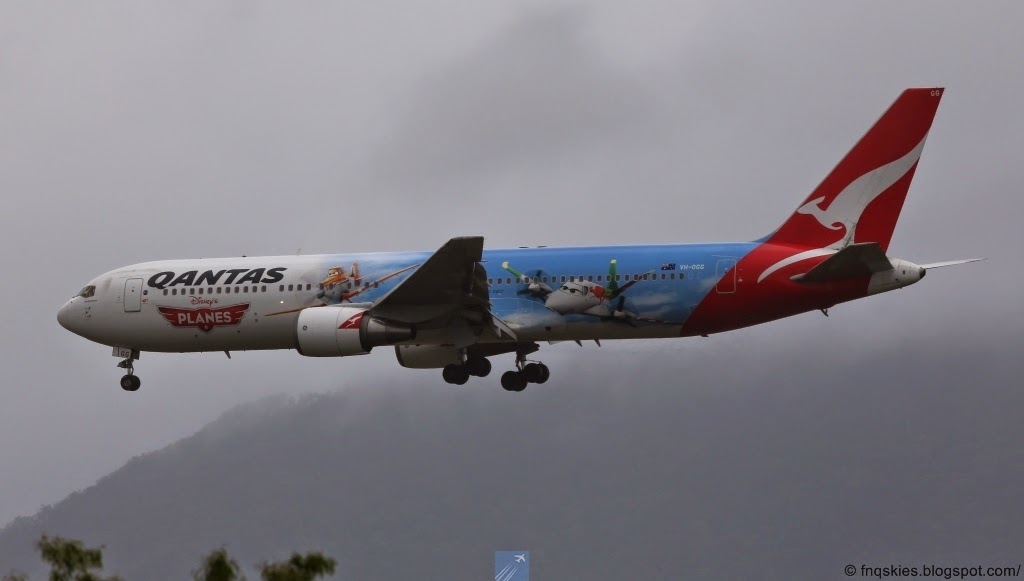 At the conclusion of flying today, VH-OGG is expected to have its recently applied - and very attractive and distinctive - livery promoting the Disney movie 'Planes' removed. 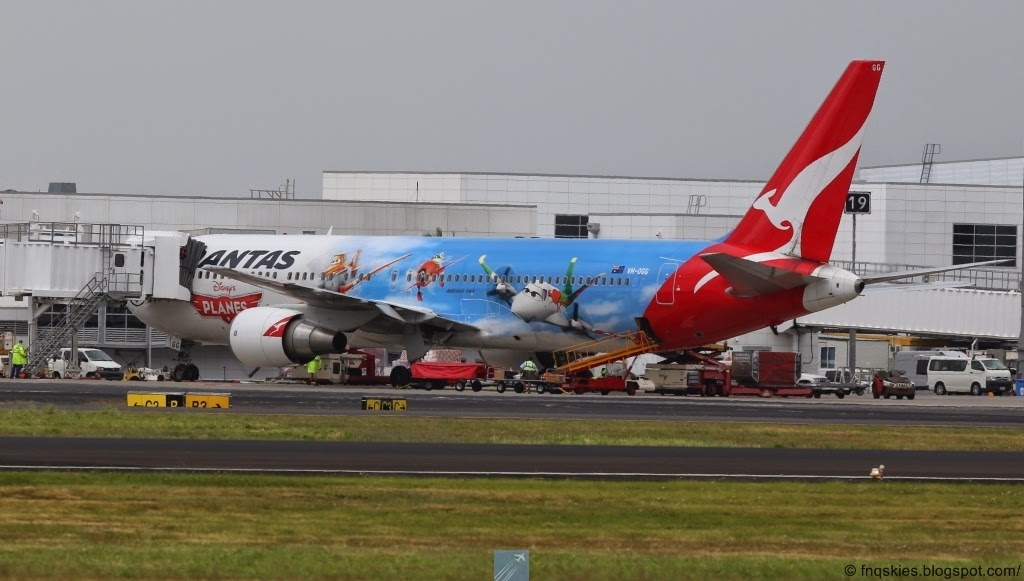 VH-OGG was ordered by Qantas in April 1989, and rolled off the production line at Boeing's Everett factory in November 1990.  VH-OGG was registered and accepted in December 1990.  It is powered by a pair of General Electric CF6-80C2B6 engines.

VH-OGG's first revenue service was from San Franciso to Sydney via Honolulu on December 12, 1990, arriving in Sydney on December 14.  VH-OGG was named 'City of Rockhampton', and was in fact noted visiting Rockhampton in early October 1993, operating a charter for the Singapore Armed Forces.

In 2011, VH-OGG was re-painted in the new Qantas corporate colours, and in 2013, it was rolled out in Sydney in a special livery to promote the Disney movie 'Planes'.  It then operated a special 'Première Planes Flight' on September 14, 2013.

Information suggests that VH-OGG will then ferry to Victorville in the United States of America (USA) for storage around Tuesday 12 August.

Acknowledgement to the Australian Airliners (AussieAirliners) web site - http://www.aussieairliners.org/ - for the historic information on VH-OGG.

Additional photos taken by the FNQ Skies Blog  ©
Posted by Damian F at 6:00 AM