During the afternoon on Thursday 27 August, Agair Logistics P/L Rockwell Turbo Commander 690B VH-LVG was noted arriving into Bundaberg Airport from Kerang in Victoria.  It was heard to be using the radio callsign of "Birddog 273".

This aircraft appears to have arrived into Bundy to provide airborne support for the recently arrived Canadian-based Conair Aerial Firefighting Dash-8-Q400MR C-FFQE which will reportedly be based at Bundaberg Airport during this coming bushfire season.

Of interest, the "Birddog" aircraft are used of the coordination of the firebombing aircraft and are usually light fixed-wing aircraft.

Meanwhile, spotted arriving into Bundaberg Airport but on Tuesday 25 August was Easternwell Beech B200C VH-HPP.  It looked to touch down from its Toowoomba base via the Sunshine Coast.  VH-HPP looked to bring firefighting personnel and some equipment into Bundaberg. 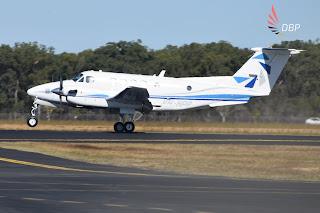 VH-HPP departed Bundaberg Airport on Wednesday 26 August and looked to return to the Sunshine Coast and then Toowoomba.

Sincere thanks once again to Dan B from Dan Beck Photography for allowing us to share these great photos!