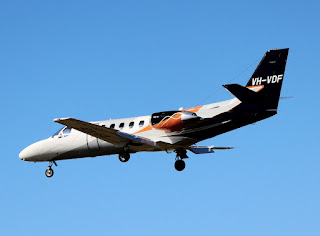 After a short time on the ground, VH-VDF then to Mareeba and Weipa at the tip of Cape York Peninsula.

UPDATE!  On Saturday 22 August, VH-VDF returned to Prosie from Weipa before continuing home to the Sunshine Coast.

Meanwhile, also on Wednesday 19 August, McDermott Aviation / Heli-Lift Australia Aerospatiale 365N2 Dauphin 2 helicopter N366SR was noted visiting Gladstone and Hamilton Island Airports while on a flight up from its Sunshine Coast base.