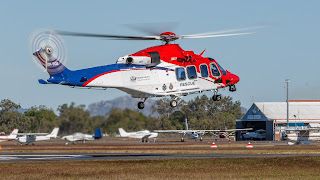 VH-EGK has been operating out of Archerfield in recent weeks as "Rescue 500" and has seemingly ferried North to Townsville to replace one of the Far North Queensland based rescue helicopters.

I presume that another AW139 helicopter will ferry South via CQ Airports in the coming days.  As we have mentioned previously, this is part of the 'rotational system' the service utilises to ensure the even distribution of flying hours on each of the QGAir Rescue helicopters.  This system avoids the need to have multiple helicopters offline for simultaneous scheduled maintenance.

Sincere thanks to local photographer Steve V for allowing us to share this great photo!