Finally!  On Wednesday 12 August, Seair Pacific / Istelcote De Havilland DHC-6-100 Twin Otter VH-BVS was photographed at Rockhampton Airport.  It was operating the weekly Fly-in Fly-out (FIFO) closed charter flight from the Gold Coast and Brisbane to Rocky then up to Collinsville Aerodrome and Townsville. 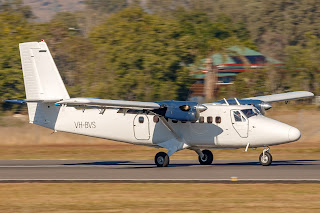 Both Seair Twin Otters - VH-BVS and VH-ZKF - have been spotted operating this flight since it started in April this year. 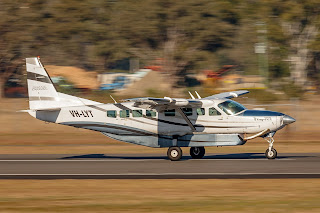 At the time of writing, it appears that VH-LYT spent the day parked and is due to depart to Wanella Station Airstrip near Coppabella early on Thursday 13 August before it then heads South to Maryborough and Hervey Bay (Fraser Coast) Airports.

Finally, it's worth mentioning that on Tuesday 11 August, more 'usual' FIFO charter flights operated through Rockhampton and Emerald Airports with the visiting FlyPelican (Pelican Airlines) British Aerospace BAe Jetstream 3206 (Jetstream 32) turboprop aircraft VH-OTQ again noted departing Rockhampton Airport for Hughenden and then Julia Creek as PE999.  It then returned to Rockhampton Airport in the early evening.