On Friday 7 August, Skytrans Airlines Dash-8-100 VH-QQF was photographed arriving into a wet and misty Mackay Airport.  It had flown up from Brisbane as SKP502. 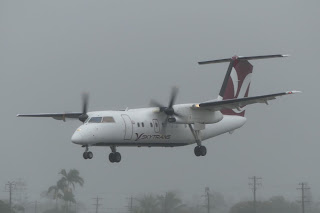 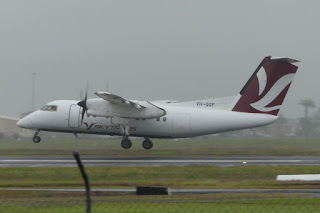 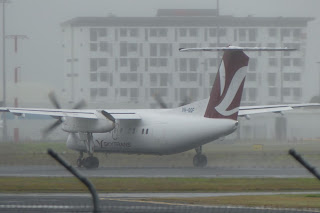 After a short time on the ground - perhaps for just a refuel - VH-QQF continued from Mackay Airport to Cairns.

Of interest, VH-QQF looks to have spent the middle of this week operating closed Fly-in Fly-out (FIFO) charter flights from Brisbane to both Miles and Chinchilla Airports.

Of further interest, this is the first time the VH-QQF has been noted in Central Queensland wearing the new Skytrans Airlines livery!

Meanwhile, also on Friday 7 August, Vanderfield Pilatus PC-12/47 VH-WPH was noted visiting Mackay Airport after flying up from Toowoomba and Archerfield.  It then flew back to Toowoomba flying via Emerald Airport.  It completed the reverse of this flight at the beginning of the week - see Blog post below.

While spotted parked on the Western General Aviation (WGA) Apron was The Redcliffe Aero Club's Cessna 310R VH-JTV.  It looked to arrive from Emerald Airport on Thursday 6 August. 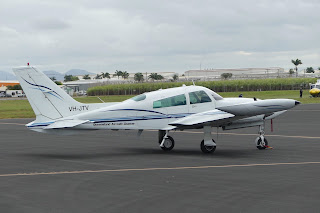 Finally, with the rainy weather and low cloud at Mackay Airport on Friday 7 August, some of the inbound Regular Passenger Transport (RPT) flights were forced to divert to Townsville before returning to Mackay Airport later in the morning.

UPDATE!  Of interest, also on Friday 7 August, one flight into Proserpine (Whitsunday Coast) Airport and one flight into Hamilton Island Airport were also forced to divert to Townsville and Brisbane respectively. 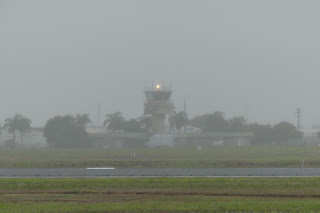 Virgin Australia Boeing B737-800 VH-YFK is shown below departing a rain-soaked Mackay Airport for Brisbane as VOZ610. 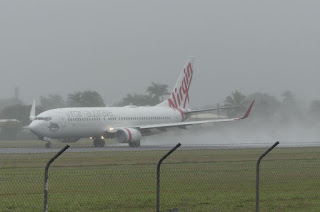 Also, the Queensland Police Service (Airwing) (State of Queensland) Raytheon B1900D VH-PSK looked to have (possibly) two unsuccessful visits to Mackay Airport during the morning and again in the afternoon with flight tracking websites suggesting it flew direct between Townsville and Brisbane and Brisbane and Townsville without being able to make the 'scheduled' stop at Mackay Airport.  VH-PSK is pictured below after carrying out a missed approach after being unable to break visual through the clouds with the Runway at Mackay Airport. 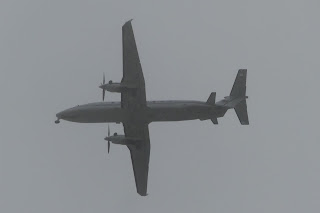 Sincere thanks to local plane spotter 'JM' for taking the time to capture and send through these great photos taken under very trying weather conditions!