On Sunday 9 August, Sydney-based Beluga Charter Company Pty Ltd Bombardier BD-700-1A10 Global Express bizjet VH-LBU was noted calling into Hamilton Island Airport.  It made an early arrival from its Sydney base before returning back there a short time later.


Meanwhile, also at Hamilton Island Airport, also on Sunday 9 August, a trio of light General Aviation (GA) aircraft that arrived during the previous week all departed, all heading separate ways.

Hawker Beechcraft G58 Baron VH-EZD departed Hamo for its Monto Airport base.  It had arrived from there on Wednesday 5 August.

And Flight One (Services) Cirrus SR20 VH-FOH departed Hamilton Island Airport for Dalby.  It had arrived from Archerfield and Rockhampton Airport on Thursday 6 August.

Also on Sunday 9 August, Corporate Aircraft Charter (South Australia) Cessna 550 Citation II bizjet VH-ZLE was noted visiting Rockhampton Airport from Brisbane.  It then departed to Townsville and Mount Isa before returning to Brisbane.
While visiting Rockhampton Airport was Piper PA-31 VH-DEP.  It arrived from Archerfield on Saturday 8 August and returned there on Sunday 9 August.

Finally, on Saturday 8 August, a nice corporate turboprop to pass through Emerald Airport was Neabrean P/L Cessna 208B Caravan VH-JOZ.  It arrived from it Toowoomba base and later departed to Cairns where it is pictured arriving.  VH-JOZ then flew back directly to Toowoomba. 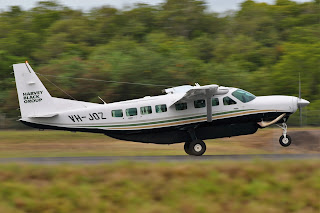