It was noted this week that two of the three Qantas Airways specially painted Boeing B737-800 aircraft called into Mackay Airport on some of the scheduled twice-daily flights from and back to Brisbane. 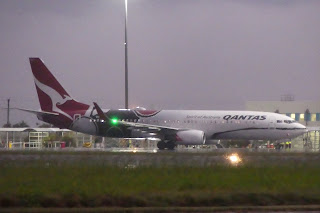 After only re-entering service in mid-July after being stored at Brisbane Airport since April, Qantas Boeing B737-800 VH-XZJ 'Mendoowoorrji' was noted visiting Mackay Airport for the first time on Monday 3 August before it visited twice on Friday 7 August.  Local plane spotter 'JM' braved the rain to capture its departure from Mackay Airport back to Brisbane as QFA988 late on Friday. 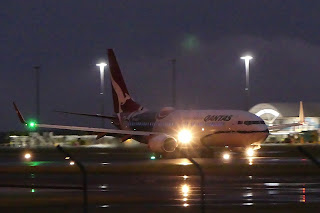 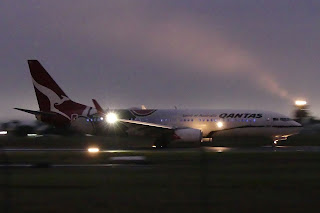 Of interest, VH-XZJ, 'Mendoowoorrji' is the fourth aircraft in Qantas' flying art series, inspired by the work of late West Australian Aboriginal painter, Paddy Bedford.  The artwork on this aircraft is an interpretation of the 2005 painting 'Medicine Pocket' which captures the essence of Mendoowoorrji, Paddy Bedford's mother's country in the East Kimberley region of Western Australia.

Paddy Bedford was born on Bedford Downs Station in West Australia and worked as a stockman for much of his life before taking up painting in his 70s. He was a founder of the Warmun art movement and was credited for inspiring a generation of Indigenous artists.

For this project, Qantas and Balarinji collaborated with the Bedford Trust and the National Gallery of Australia to ensure design of the fuselage stayed true to the original painting.

Mendoowoorrji was painted at Boeing's headquarters in Seattle, USA and delivered into the Qantas fleet in November 2013. The design took over 950 man hours to complete over a five days period and used 500 litres and 125kg of paint.

The designers worked with 140 nylon stencils to re-created the more intricate design. The techniques used to achieve the paint strokes and detailed shading on the fuselage were a Boeing first.

Meanwhile, on Wednesday 5 August, Qantas’ first retro jet, the original 'Retro Roo' B737-800 VH-XZP was noted at Mackay Airport operating the late afternoon QFA987/988 flight also from and back to Brisbane.  It is believed that this is the first time ever that VH-XZP has visited Mackay Airport.

Sincere thanks again to local plane spotter 'JM' for taking the time to capture and send through these great photos taken under very trying weather conditions in Mackay!