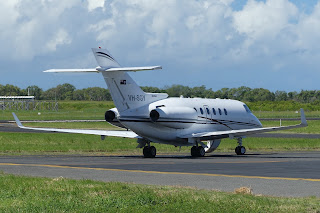 Then, during the middle part of the morning, VH-SGY returned to Brisbane.

Finally, also on Tuesday 25 August, the Queensland Police Service (Airwing) (State of Queensland) Cessna 208 Caravan VH-PSQ was back at Rockhampton Airport again for the second day-in-a-row.  It was later departing to Brisbane.