On Monday 3 August, Royal Australian Air Force (RAAF) Boeing C-17A Globemaster III A41-209 was spotted as it climbed out after completing a missed approach and low overshoot at Rockhampton Airport.  It was heard to be flying as "Stallion 21". 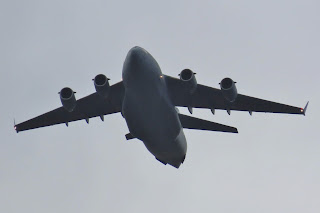 It appears that the Globemaster earlier departed from RAAF Base Amberley and completed low level operations around Kingaroy and Gayndah before climbing and continuing up to Rocky.

A41-209 then completed two missed approaches at Rockhampton Airport before it then returned to Amberley.

Meanwhile, it seems that over the weekend on Saturday 1 August, Royal Australian Air Force (RAAF) Alenia C-27J Spartan transport aircraft A34-008 completed airwork within the Shoalwater Bay Training Area (SWBTA) while on a flight from RAAF Base Amberley.  It seemed to then continue further North.

Sincere thanks to local plane spotter Kayanne H who was at the right place at the right time to capture this quick photo.