After some time out of the air, on Tuesday 11 August, Mitchell Water Cessna 525 Citation M2 bizjet VH-WMY was noted back in Central Queensland, arriving into Proserpine (Whitsunday Coast) Airport from its Melbourne (Moorabbin) base via Parafield Airport at Adelaide in South Australia.


After a short time on the ground, it then returned to Moorabbin.

Meanwhile, also on Tuesday 11 August, Machjet (Machjet International) Beech B200 King Air VH-PUY (ex P2-LNJ) landed at Longreach Airport from the Sunshine Coast, Brisbane and Bankstown.  It then departed to Tennant Creek in the Northern Territory.

At the time of writing, VH-PUY is expected to return to Brisbane and the Sunshine Coast on Wednesday 12 August. 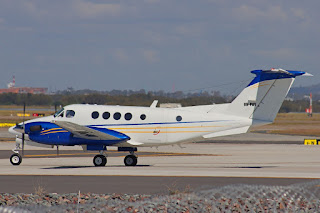 UPDATE!  VH-PUY was photographed (above) taxiing in at Brisbane Airport - our first glimpse at the latest King Air on the Australian Aircraft Register and as reported previously us ex P2-LNJ.

Meanwhile, also on Tuesday 11 August, it appeared that fellow Machjet (Machjet International) Hawker Beechcraft B200 King Air VH-ZSY completed on of its regular Fly-in Fly-out (FIFO) charter flights from the Sunshine Coast to Mount Coolon Aerodrome and back.