FlyPelican (Pelican Airlines) BAe J32 VH-OTQ Out and About from Rockhampton Airport – Plus More!

After being parked for almost a week, on Tuesday 4 August, the visiting FlyPelican (Pelican Airlines) British Aerospace BAe Jetstream 3206 (Jetstream 32) turboprop aircraft VH-OTQ was noted departing Rockhampton Airport on what now appears to be a weekly Fly-in Fly-out (FIFO) charter flight to Hughenden and then Julia Creek as PE999. 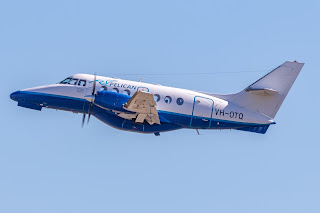 At the time of writing, VH-OTQ was due to return to Rockhampton Airport from Julia Creek early on Wednesday 5 August but as PE998.
Also on Tuesday 4 August, Machjet (Machjet International) Beech B200 King Air VH-PUY (ex-P2-LNJ) was noted visiting Mount Coolon Aerodrome on a Fly-in Fly-out (FIFO) charter flight.  It arrived from and later departed back to the Sunshine Coast.

Meanwhile, on Monday 3 August, Seair Pacific (Istlecote) Textron Aviation (Cessna) 208B Caravan VH-TLH flew up from Hervey Bay (Fraser Coast) and Maryborough Airports to Wanella Station Airstrip near Coppabella.  It then flew down from Wanella to Rockhampton Airport before returning to Hervey Bay Airport.

UPDATE!  VH-TLH returned to CQ on Wednesday 5 August, flying up from the Gold Coast to visit Rockhampton and Mackay Airports before touching down at the Whitsunday Airport at Shute Harbour.  It then appeared to return directly to the Gold Coast.

Also on Monday 3 August,  Austrek Aviation Beech B200 King Air VH-ZMW made the charter company's first visit to Rockhampton Airport for the week, arriving from Toowoomba and Archerfield and later departing back to Toowoomba.  An Austrek Aviation King Air then reverses this run usually on a Friday.

Finally, also on Monday 3 August, Vanderfield Pilatus PC-12/47 VH-WPH was noted flying up from Toowoomba to visit Emerald and Mackay Airports before it then returned South to Archerfield and Toowoomba.

It appears that fellow Vanderfield Cessna 210N VH-JSC also arrived into Emerald Airport from Toowoomba but on Sunday 2 August.  It then appeared to head West to Longreach Airport on Monday 3 August.

UPDATE!  On Wednesday 5 August, VH-JSC departed Longreach Airport and returned to Emerald Airport and then Toowoomba.