Several locally-based corporate bizjets have been noted flying in and out of some Central Queensland Airports over the last few days.

On Sunday 18 September at Hamilton Island Airport, Brenzil Dassault Falcon 7X bizjet VH-CRW visited once again, this time calling in from Townsville and later departing to Brisbane.  Also arriving into Hamo was GSA Industries Bombardier CL-600-2B16 Challenger 601 bizjet VH-NSB.  It touched down from Melbourne (Essendon).  While it appears that Marcplan Charter Embraer EMB-135BJ Legacy bizjet VH-VLT departed Hamilton Island Airport for Essendon also on Sunday 18 September after it had arrived from there on Thursday 15 September.


And at the time of writing, Shortstop Jet Charter British Aerospace BAe-125-1000B bizjet VH-LMP is scheduled to call into Hamilton Island Airport from Essendon on Tuesday 20 September.  It will then depart to Sydney.

At Rockhampton Airport on Sunday 18 September, LifeFlight (ex Careflight Queensland) (Aeromed) LearJet 45 bizjet VH-VVI "Ambulance 451" called in from Brisbane.  It departed back to the capital a little while later. 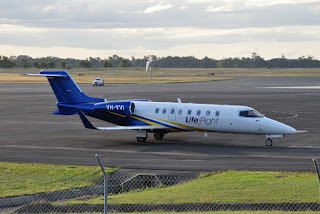 VH-VVI also called into Rocky on Friday 16 September (as shown above).  On this occasion, it touched down from Barcaldine.  It then departed to Mackay before flying back to Brisbane.  VH-VVI also visited Mackay Airport on Wednesday 14 September, calling in from Townsville and later departing to Brisbane.

While also calling into Rockhampton Airport on Friday 16 September was Light Jets Australia Cessna 525 Citation CJ1 bizjet VH-TFW which touched down from Archerfield and Toowoomba. 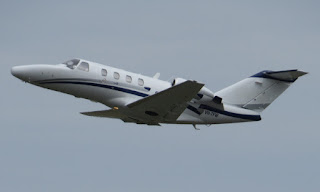 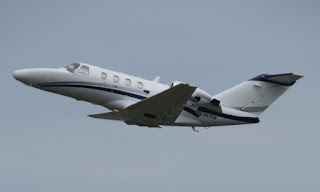 On Monday 19 September, VH-TFW is pictured above departing Rocky on return to Archerfield.

Finally, last week on Thursday 15 September, (former) Rockhampton based Cessna 550 Citation II bizjet VH-JMK was noted flying from the Sunshine Coast to Cairns and then Port Moresby (Papua New Guinea).  It may very well be leaving the country given the financial difficulty its owner (J.M. Kelly Project Builders) has found itself in.

Of interest, the Citation has operated in PNG on a previous occasion wearing the PNG-registration marking of P2-JMK.  We shall see what happens!

While on Tuesday 13 September, Mackellar Mining Equipment / Flight Options (Australia) Cessna 560 Citation Ultra bizjet VH-MMC arrived at Emerald Airport from the Sunshine Coast.  It stayed for the night and returned to the Sunny Coast on Wednesday 14 September.