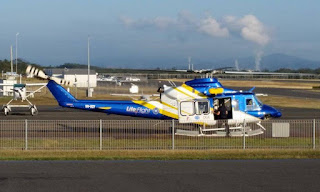 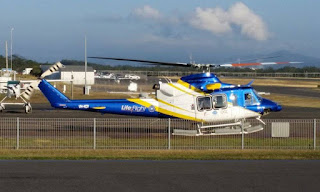 Since 2013, LifeFlight (CareFlight) has served Gladstone and surrounds in support of local CSG to LNG gas industry projects. This contract expired on Sunday 11 September and was not renewed.

Of interest, VH-XCY is a 2006 built Bell 412EP helicopter powered by two Pratt & Whitney PT6T-3DF turboshaft engines. The immaculately presented chopper is capable of uplifting 2 stretchered patients, cruising at 120 knots, obtaining a service ceiling of 10,000 ft and achieving an approximate range (weather & payload dependent) of up to 250 nautical miles (450 kms).

Thanks 'Mick' for sharing these great photos and video.