Over the last few days there continues to be a good variety of locally-based corporate bizjets calling into Hamilton Island Airport - with some even being 'forced' to fly over to the mainland at park at Proserpine / Whitsunday Coast Airport.

Although it was a relatively quiet day at Hamilton Island Airport on Saturday 24 September, with only Sundown Pastoral Company (of Bonogin in the Gold Coast Hinterland) Raytheon B300 Super King Air VH-NSI calling in from the Gold Coast and Taroom and later returning to the Gold Coast.

Remaining parked at Proserpine / Whitsunday Coast Airport is MWP Racing Bombardier CL-600-2A12 Challenger 601 VH-MXK which arrived from Hamo last Thursday 22 September.  I spotted it on Monday 26 September as I returned to the region from a nice holiday in Brisbane! 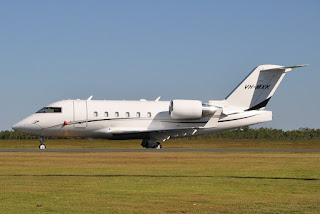 On Monday 26 September, the action didn't stop with Pratt Aviation Bombardier BD-700-1A10 Global Express bizjet VH-VGX arriving from Essendon.  It later departed to Brisbane where I happened to snap it before heading to Prosie! 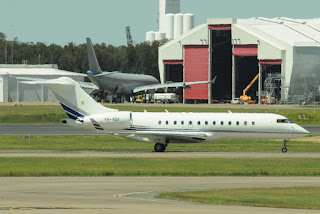 Also popping into Hamo from Essendon on Monday 26 September was Marcplan Charter Gulfstream G-IV-X (G450) VH-MBP.  It then looked to complete a flight to Proserpine before returning to Hamo where it looks to be staying for at least the night.

I assume that VH-MBP might have a parking spot on Hamo as Execujet Australia Bombardier CL-600-2B16 Challenger 604 bizjet VH-VSZ - which had been parked since it arrived last Friday 23 September - departed to Sydney.

VH-MBP was joined at Hamilton Island Airport by Embraer EMB-135BJ Legacy VH-VLT which is also operated by Marcplan Charter.  It too touched down from Essendon.

And it seems the action isn't stopping - as this post is being written, Sundyne (Execujet Australia) Cessna 650 Citation VII VH-SSZ is scheduled to call into Hamilton Island Airport from Sydney early on Tuesday 27 September.

Finally, it is worth noting that the LifeFlight (ex Careflight Queensland) (Aeromed) LearJet 45 bizjet VH-VVI "Ambulance 451" has yet again visited CQ on three occassions over the last few days, calling into Mackay Airport on Saturday 24 September, Rockhampton Airport in the wee small hours of Monday 26 September and now Blackall and Mackay Airports as this post is being written late on Monday 26 September.
Posted by Damian F at 8:11 PM