A Nice Pair of Cessna Citation Bizjets Call into Longreach Airport - And More!

On Wednesday 28 September, a nice pair of Cessna Citation bizjets were noted calling into Longreach Airport. 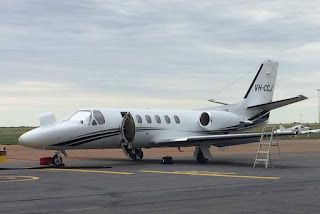 A little later, Earth Commodities Cessna 550 Citation Bravo bizjet VH-CCJ was spotted (above) on the ground at Longreach Airport.  It called in from its Brisbane base and looks to be staying for at least the night.

Meanwhile, a couple of interesting light General Aviation (GA) aircraft have also been noted calling into Longreach Airport over recent days including Georgetown-based Piper PA-46-500TP Malibu VH-TPM which called in from Toowoomba also on Wednesday 28 September.  It later departed to Cloncurry.

Back on Saturday 24 September, Interair Piper PA-31 VH-FHJ called into Longreach from its Melbourne (Essendon) base and Bourke.  It later departed to Cairns where it now looks to be completing a series of aerial survey flights.

Finally, across at Emerald Airport, also on Saturday 24 September, Cessna 208 Caravan VH-WDE popped in from Tully and continued South, while on Monday 26 September, Sydney Skydivers Pacific Aerospace PAC 750XL VH-XLC was due to pass through Emerald Airport while heading North from Wilton (New South Wales) to Innisfail.  It however looked to call into Roma and Bowen before reaching Innisfail Tuesday 27 September where is has since commenced parachuting operations.