A Few Interesting Visitors at Emerald Airport on Sunday - And Clermont Aerodrome on Saturday!

A couple of interesting arrivals and departures into Emerald Airport over the last couple of days including an nice visitor on Sunday 11 September in the form of Alliance Airlines Fokker F-100 VH-XWO.


It was operating a closed charter flight for supporters of the North Queensland Cowboys Rugby League Team and called into Emerald Airport from Melbourne (Essendon) Airport as UTY551.  After taking on fuel, VH-XWO continued to Townsville again as UTY551.

Another arrival into Emerald Airport from Melbourne on Sunday 11 September was Toll Freight Aviation / Toll Express Metro III VH-UZP which called in from Tullamarine Airport as TFX922.  It had earlier positioned to Tulla from Brisbane before dawn as TFX921.


After remaining parked at Emerald Airport for the day, VH-UZP returned to Brisbane but as TFX923.

Meanwhile, General Aviation Maintenance (GAM) completed another 'swap' of aircraft based at Emerald Airport that operate the week-daily freight run to Barcaldine and Longreach Airports.  AeroCommander 500-S VH-YJM departed to Brisbane late on Friday 9 September and was replaced by fellow AeroCommander 500-S VH-MEH which touched down from Brisbane on Sunday 11 September.

Also on Sunday 11 September, LifeFlight (ex Careflight Queensland) (Aeromed) LearJet 45 bizjet VH-VVI "Ambulance 451" made yet another trip into Central Queensland calling into Emerald Airport from Brisbane.  It looked to be completing a med-evac flight and after a short while on ground, VH-VVI returned to Brisbane.

It also called into Barcaldine Airport on Saturday 10 September.

Finally, on Saturday 10 September, I spotted Henty Aviation Cessna 425 VH-BSM at my local Clermont Aerodrome after it had earlier arrived from the South.  It departed later in the afternoon. 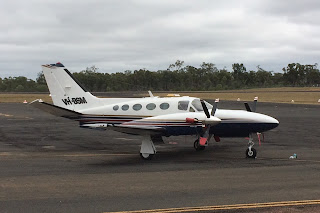 And back in mid-August, I also spotted Karreman Quarries (Austcopters) corporate Sikorsky S-76B helicopter VH-KQL also at Clermont Aerodrome after it had earlier flown in from Biloela / Thangool Airport. 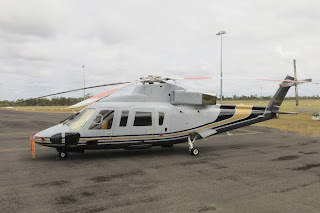 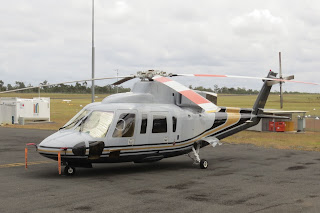